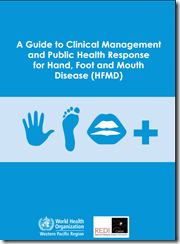 WHO Guidance On HFMD

ProMed Mail carried a report over the weekend from Professor Bruce Thorley of the National Enterovirus Reference Laboratory in Australia that described 5 recent cases of acute flaccid paralysis (AFP) in children who tested positive for the EV71 virus.

EV71 – which is most often reported in Asia and the Western Pacific region - is one of more than 60 non-polio enteroviruses that can cause human illness. While it is frequently linked to severe outbreaks of HFMD (Hand, Foot, & Mouth Disease), EV71 is capable of producing other serious neurological illnesses – including poliomyelitis-like paralysis - as well.


A snippet from the ProMed  report, then I’ll return with more.

Australia conducts surveillance for cases of acute flaccid paralysis (AFP) in children less than 15 years of age as part of the national polio surveillance program funded by the Australian government.

From January to early May 2013, human enterovirus 71 (EV71) was detected in stool specimens from 5 of 14 (36 percent) AFP cases in children. EV71 was also detected in specimens from cases of hand-foot-mouth disease (HFMD) and non-paralytic neurological illness by members of the Enterovirus Reference Laboratory Network of Australia.

A phylogenetic analysis of the VP1 genomic region identified homology with the EV71 C4a sub-genogroup circulating in China and South East Asia, which has been associated with more severe neurological complications than other sub-genogroups in recent years.

HFMD is normally a mild childhood illness, most often caused by the Coxsackie A16 virus and more rarely by Coxsackie A10 here in the United States. In recent years, we’ve seen the emergence of the Coxsackie A6 virus which has been linked to somewhat more severe HFMD cases (see MMWR: Coxsackievirus A6 Notes From The Field).

But Enterovirus 71 has been linked to the most severe cases of HFMD – particularly across Asia - with serious outbreaks recorded over the past 15 years in places like China, Taiwan, Malaysia, Hong Kong, and last year in both Vietnam and Cambodia (see Updating The Cambodian EV71 Story).

An article that appeared in early 2001 in Clinical Infectious Diseases (cite Neurological Manifestations of Enterovirus 71 Infection in Children during an Outbreak of Hand, Foot, and Mouth Disease in Western Australia Peter McMinn, Ivan Stratov, Lakshmi Nagarajan, and Stephen Davis) describes its impact this way:

Children <4 years of age are particularly susceptible to the most severe forms of EV71-associated neurological disease, including meningitis, brain-stem and/or cerebellar encephalitis, and poliomyelitis-like paralysis.

The neurological complications of EV71 infection may occasionally cause permanent paralysis or death. Several large epidemics of severe EV71 infection in young children, including numerous cases of fatal brain-stem encephalitis, have recently been reported in Southeast Asia [10–12].

Like other RNA viruses we monitor, EV71 is constantly evolving, creating new strains or lineages, and as a result we’ve seen repeated outbreaks over the years.

During the late 1990s and early 2000s, genotypes C1, C2, B3, and B4 were most commonly reported as sparking outbreaks in Malaysia, Singapore, and Taiwan. 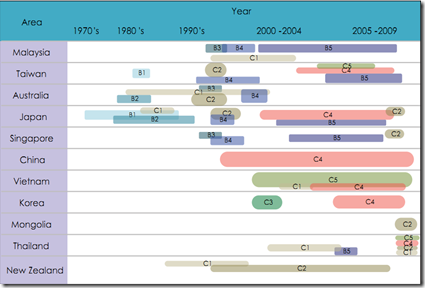 The spread and diversity of EV71 – Credit WHO

As shown in the chart above, the more aggressive C4 genotype – which first appeared in China in 1998 - has made significant inroads across much of Asia and the Western Pacific over the past 15 years.

For now, control and prevention are limited to promoting good hygiene, and removing children with signs of the disease from child care or school environments.

This from the Queensland Health Department.

EV71 infection is transmitted from person to person by direct contact with nose and throat secretions, saliva, fluid from blisters or the faeces of infected people.
The virus may continue to be excreted in the faeces for several weeks. A person is infectious for as long as the virus is present in the faeces.

Treatment of EV71 neurological disease usually focuses on the person's symptoms. Currently there is no specific treatment.

Good hygiene is the single most effective way of preventing the spread of EV71 infection. Hands should be washed thoroughly in soap and water for at least 20  seconds and then dried thoroughly. It is important to wash hands after going to the toilet, touching soiled linen or articles, changing nappies and before preparing or eating food. Teach children to wash their hands effectively before eating or drinking and after going to the toilet.

Children with hand foot and mouth disease should be excluded from child care and schools until all blisters have healed.

Children with enterovirus 71 neurological disease should be excluded from childcare/school until they have a written medical clearance from a doctor or public health unit confirming that the virus is no longer being excreted in their faeces.

Numbers that illustrate just how big an impact this normally `mild’ childhood disease can have.

For more on HFMD, including the more severe Enterovirus-71 (EV-71), you may wish to revisit the following blogs:

The Emerging Threat Of EV71

Posted by Michael Coston at 7:24 AM