Study: Willingness of Physicians To Work During A Severe Pandemic 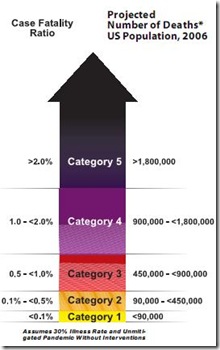 During any serious pandemic scenario the healthcare system will need to be able to cope with a flood of infected patients, their regular non-pandemic patient load (heart attacks, strokes, trauma, etc.), along with an influx of the `worried well’.

Complicating matters, HCWs (Healthcare workers) are not immune to getting sick, and some estimates have put the number of HCWs that may be absent for an extended period of time due to illness, or caring for a sick family member, as high as 40%.

But there is another category of absenteeism which is less commonly addressed; the unwillingness of some HCWs (and their support staff) to report for work during a particularly severe pandemic.

The decision to report for work at a hospital or clinic during a severe pandemic would not be an easy one, as the HCW would be not only repeatedly exposing themselves to the virus, many would also be exposing their families by proxy.

Vaccines, antivirals, and even PPEs (Personal Protective Equipment) may be in short supply (or non-existent), and there may be hospital security issues as well.  Some HCWs fear being `locked down’ or quarantined at their facility and unable to go home and care for their own families.

And given the expected absenteeism levels and the high rate of admissions, the work load for the remaining staff would be enormous.

And it isn’t just doctors, nurses, and techs.

Non-medical (and often low paid) employees such as housekeeping, food service, laundry, security, lab, and even clerical workers are vitally important. Few facilities could operate for very long without them.

We’ve a new study, published today in the Asia Pacific Family Medicine journal, that polls Canadian doctors to try to determine under what circumstances they would be unwilling to work during a pandemic. 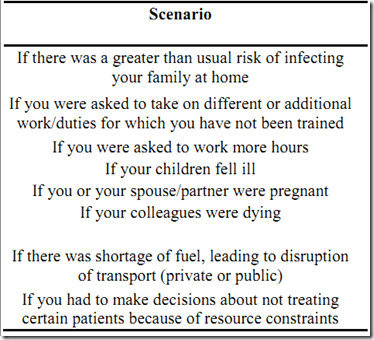 Although limited by only a 22% response rate to the poll, under certain scenarios, fewer than half of the doctors who responded would be willing to report for work during a severe pandemic.

Alberta family physicians' willingness to work during an influenza pandemic: a cross-sectional study

Effective pandemic responses rely on frontline healthcare workers continuing to work despite increased risk to themselves. Our objective was to investigate Alberta family physicians willingness to work during an influenza pandemic. Design: Cross-sectional survey. Setting: Alberta prior to the fall wave of the H1N1 epidemic. Participants: 192 participants from a random sample of 1000 Alberta family physicians stratified by region. Main Outcome Measures: Willingness to work through difficult scenarios created by an influenza epidemic.

Although many physicians intend to maintain their practices in the event of a pandemic, in some circumstances fewer are willing to work. Pandemic preparation requires ensuring a workforce is available. Healthcare systems must provide frontline healthcare workers with the support and resources they need to enable them to continue providing care.

You can read the full, provisional PDF file here.

These numbers are not out of line with previous studies we’ve seen, including a 2010 report (See Study: Willingness Of HCWs To Work In A Pandemic) that polled 18,612 employees of the Johns Hopkins Hospital from January to March 2009, and found:

Demographic and professional distribution of respondents was similar to all hospital staff. Overall, more than one-in-four (28%) hospital workers indicated they were not willing to respond to an influenza pandemic scenario if asked but not required to do so. Only an additional 10% were willing if required. One-third (32%) of participants reported they would be unwilling to respond in the event of a more severe pandemic influenza scenario.

Another study (see UK Poll: Will HCW’s Work In A Pandemic?), conducted in early 2009, asked:

Will the NHS continue to function in an influenza pandemic? a survey of healthcare workers in the West Midlands, UK

Levels of absenteeism amongst HCWs may be considerably higher than official estimates, with potential absence concentrated amongst certain groups of employees. Although interventions designed to minimise absenteeism should target HCWs with a low stated likelihood of working, members of these groups may also be the least receptive to such interventions. Changes to working conditions which reduce barriers to the ability to work may not address barriers linked to willingness to work, and may fail to overcome HCWs' reluctance to work in the face of what may still be deemed unacceptable risk to self and/or family.

And yet another study, this time from Australia (see And The New Survey Says . . .), focused on two scenarios:

Out of 570 questionnaires distributed, 560 were completed.  The results, with just a single avian flu case, were surprising.

How would Australian hospital staff react to an avian influenza admission, or an influenza pandemic?

Of course, the actual number of HCWs that would report for work during a pandemic would depend on a great many factors, including:

During the early months of the 2009 H1N1 pandemic, shortages of N95 respirators forced many health facilities to ration them, or move to less protective surgical masks. This led to numerous complaints from nursing staffs (see Nurses Protest Lack Of PPE’s).

But should a more severe pandemic arise, a failure to provide adequate protective gear would likely drive up HCW absenteeism dramatically. Even if some HCWs were to agree to work without protection, the attrition rate due to illness would likely soon negate the benefits of their heroism.

The bottom line is, in order retain staff during a pandemic, healthcare facilities need to go above and beyond to keep their employees, and their workplace, safe.

Anything less is a recipe for disaster.

For more on HCW safety during a pandemic, and their willingness to work, you may wish to revisit these earlier posts:

Study: 1 In 6 HCWs May Not Work In Any Pandemic