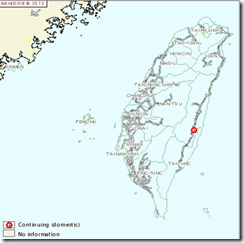 When we talk about `bird flu’ outbreaks in poultry we tend to think of H5N1, H5N2, H9N2 or the newly emerging H7N9 virus. Occasionally we’ll see outbreaks of the less common H7, H10, and H11 subtypes.

But in truth, there are many other HA/NA influenza combinations – particularly circulating among wild birds – and they occasionally find their way into domesticated poultry.

Other than H5N1 and H7N9, these viruses are believed to pose only a minor threat to human health.

Taiwan has been battling repeated outbreaks of H5N2 for years, but today we are learning that they have discovered the H5N3 virus on the island for the first time.

Two stops, the OIE report and a brief item from Taiwan Focus, after which I’ll be back with more on the history of H5N3. 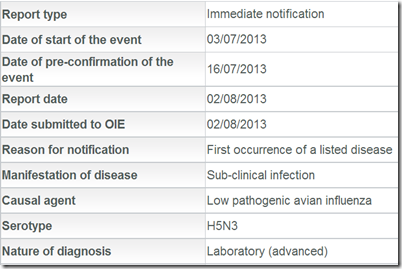 During the first round surveillance conducted on the poultry farms around the H5N2 infected duck farm detected in Hua-Lien County, the H5N3 avian influenza virus was isolated from swabs taken from a meat-type duck farm on 16 July 2013.

Movement restriction was conducted on this infected farm. The result of clinical investigation showed that the duck were in healthy condition without clinical signs and abnormal mortality. Subsequently, the national laboratory confirmed this H5N3 case as LPAI by virological tests and pathogenicity test on 2 August 2013.

The surveillance of poultry farms around the H5N3 affected farm are in progress. Note by the OIE Animal Health Information Department: H5 and H7 avian influenza in its low pathogenic form in poultry is a notifiable disease as per Chapter 10.4. on avian influenza of the Terrestrial Animal Health Code (2012).

Taipei, Aug. 5 (CNA) An outbreak of low pathogenic H5N3 avian influenza has been detected on a duck farm in the eastern county of Hualien, the first occurrence of the virus strain in Taiwan.

The virus was isolated from swabs taken from the farm July 16 and confirmed by the national laboratory Aug. 2, according to a report submitted by the Council of Agriculture to the World Organization of Animal Health (OIE) that same day.
Twenty of the 13,400 ducks on the farm tested positive for the virus, the report said.

The results of a clinical investigation showed that the ducks were healthy and without clinical signs or abnormal mortality, it said, adding that surveillance of poultry farms around the H5N3- affected farm is being conducted.


While perhaps not at the top of our avian flu hit parade, H5N3 holds the distinction of being one of the first flu strains isolated in wild birds, over 50 years ago. This from the Journal of Wildlife Diseases, July 2007.

VIROLOGY OF AVIAN INFLUENZA IN RELATION TO WILD BIRDS

The first recorded isolation of influenza virus from wild birds was from a common tern (Sterna hirundu) in 1961. This HPAI H5N3 virus was responsible for an outbreak in South Africa where at least 1,600 of these birds died (Alexander, 2000).

Readers with good memories will recall we saw an outbreak of H5N3 in Germany back in 2008 (see Low Pathogenic Bird Flu In Germany). Before that, H5N3 was reported in both Quebec and Sweden in 2005.

More recently, in January of 2012 the H5N3 virus was detected in Victoria, Australia (see DAFF Biosecurity Bulletin - March 2012), and again in February of 2013, H5N3 showed up in a backyard duck in Henley Brook, Western Australia (OIE link).

Currently, all H5 and H7 avian flu subtypes (regardless of pathogenicity) are required to be reported to the OIE due to their ability to mutate from a low pathogenic virus to highly pathogenic virus.

Up until March of this year, H7 avian flu strains were considered to pose only a minor threat to human health. Then the H7N9 virus arrived in China, and changed the rules.

Which is why we pay attention to outbreaks such as this one in Taiwan, even though it appears to have low public health implications.

With influenza, the only real constant is change.  And what we believe to be true about a strain today, can’t be guaranteed to remain true tomorrow.

Posted by Michael Coston at 7:33 AM