On September 8th (see KSA MOH Announces New MERS Cases For Third Day in A Row) I noted that the Saudi MOH MERS case count graphic had fallen out of sync with independent counts (based on MOH announcements), and was lagging by 4 cases.  At the time  I wrote:

The Saudi graphic at the top of this page indicates 96 cases, and 47 fatalities – which is 4 cases less than have been publicly announced by the MOH (see Flutrackers MERS List).  Exactly why this should be is a bit of a mystery.

KSA may not be counting all of the asymptomatic cases they’ve reported, their graphic artist might not work the weekend, or perhaps they’re just confused as we are.

In any event, the numbers we have (official or otherwise) are unlikely to fully represent the spread of this virus.

Since then, the Saudi case count has lagged behind independent counts by 4 (well, 5 actually.  Since the Saudis don’t count one case (FluTrackers case #10)  who fell ill in the KSA, but was diagnosed and died in the UK).   Nevertheless, this gap has remained consistent for the better part of a month.


Yesterday, without announcing any new cases, the graphic on the KSA site was changed.   I’ve waited to see if any new cases were forthcoming, but have only found reference to the `new count’ in an announcement (in Arabic) Scientific Committee: No cases of (Corona) among the pilgrims.

The `official’ case count is likely an undercount of true number of infections.

Mild and asymptomatic cases have probably gone undetected, and serious cases (including fatalities) may well have been misdiagnosed over the past year.   In Saudi Arabia, as it is in all countries, surveillance and testing can only show us part of the picture.

Even in the United States, the CDC can’t tell us with precision how many people contract Lyme disease each year, or influenza, or even Dengue.  Some of the reasons are illustrated in the pyramid chart below. 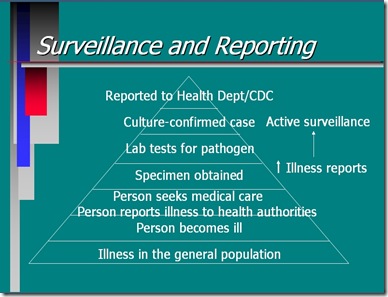 Official numbers almost always only represent the `tip of the pyramid’.

The question is, how big is the `base’ of this pyramid?   And experience has shown that can vary widely, depending upon the disease.   Until current, validated seroprevalence studies can be conducted on a statistically significant segment of the Saudi population, we aren’t likely to have a really good idea of the size, or shape of the base of this pyramid.

But for now, the good news is we haven’t seen a huge surge of serious illnesses associated with this virus.

Whether this is an indication of limited spread in the population, or suggests a milder presentation in most people, is one of the mysteries of the MERS coronavirus that has yet to be unraveled.

Posted by Michael Coston at 7:44 AM