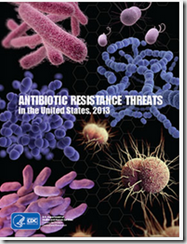 Yesterday the CDC released a comprehensive report on the threat of growing antibiotic resistance, with Director Thomas Frieden warning, `“If we are not careful, we will soon be in a post-antibiotic era.” – a stark forecast not dissimilar from the one that World Health Director-General Margaret Chan gave a year ago (see Chan: World Faces A `Post-Antibiotic Era’).

Bringing all of this together is Flublogia’s favorite `scary disease girl’ - journalist, author, and blogger Maryn McKenna - whose beat regularly revolves around the world of antimicrobial resistance.

Maryn is the author of the award winning book Superbug: The Fatal Menace of MRSA, and is probably responsible for the sale of more hand sanitizer and soap than any other science writer in the business.

Maryn posted the first of what is likely to be a series of posts on this CDC report yesterday.   Follow the link to read:

CDC Threat Report: ‘We Will Soon Be in a Post-Antibiotic Era’

The U.S. Centers for Disease Control and Prevention has just published a first-of-its-kind assessment of the threat the country faces from antibiotic-resistant organisms, ranking them by the number of illnesses and deaths they cause each year and outlining urgent steps that need to be taken to roll back the trend.

The agency’s overall — and, it stressed, conservative — assessment of the problem:

Posted by Michael Coston at 7:55 AM