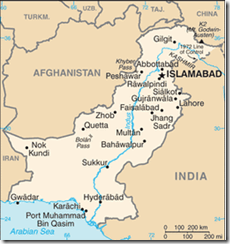 The violent campaign against the polio vaccination effort in Pakistan continues, with a fresh bomb attack in a Peshawar suburb on a van that killed two, and injured more than a dozen others.  Most of those injured appear to be police officers, or other members of the protection team.

This report from Aljazeera News.

A bomb hitting a police van protecting a polio vaccination team in northwest Pakistan has killed two people and wounded 12 others, police said.

The attack took place on the third and last day of a UN-backed vaccination campaign in a suburb of the city of Peshawar on Monday, police said, adding that a policeman was among the two dead.

Najeebur Rehman, a senior police official, said those killed were a police officer and a member of a volunteer peace committee. He said the bomb went off just as officers reached the village to provide security to polio teams administering anti-polio vaccine to local residents..

Over the past ten months we’ve seen horrific coordinated attacks made against aid workers, either involved with or associated with the Polio Vaccination drives in Pakistan.

Since then additional attacks have occurred, often resulting in temporary suspension of their vaccination efforts. Pakistan is one of 3 countries where the polio virus is still endemic (the others being Afghanistan and Nigeria).

The Pakistan attacks may be related to the Taliban’s condemnation of polio immunization campaigns after the use of a sham hepatitis vaccination campaign as a CIA cover in the pursuit of Osama Bin Laden (see Maryn McKenna’s Update: Pakistan, Polio, Fake Vaccines And The CIA).  Additionally, many believe that vaccinations are part of a Western plot to sterilize Muslims, a notion that some local clerics have helped foster.

In their GAR update of September 20th, 2013 on Poliovirus detected from environmental samples in Israel and West Bank and Gaza Strip  the World Health Organization advised:

It is important that all polio-free countries, in particular those with frequent travel and contacts with poliovirus-affected countries and areas, strengthen surveillance for cases of acute flaccid paralysis in order to rapidly detect any new virus importations and to facilitate a rapid response. Countries, territories and areas should also maintain uniformly high routine immunization coverage at the district level to minimize the consequences of any new virus introduction.

WHO’s 'International Travel and Health' recommends that all travellers to and from poliovirus-affected countries and areas be fully vaccinated against polio. Three countries remain endemic for indigenous transmission of wild poliovirus virus: Afghanistan, Nigeria and Pakistan. Additionally, in 2013, the Horn of Africa has been affected by an outbreak of wild poliovirus type 1.