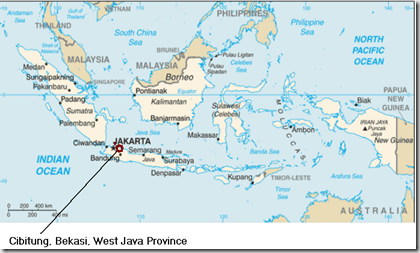 
My thanks to Gert van der Hoek of FluTrackers for picking up this item posted on the Indonesian Ministry of Health website, detailing the events surrounding the death of a 28-year-old truck driver from the H5N1 virus. While still leading the pack with the most H5N1 cases worldwide, the number of reported cases out of that archipelago nation has dropped dramatically this year, with this being only the second case announced by their Ministry of Health. 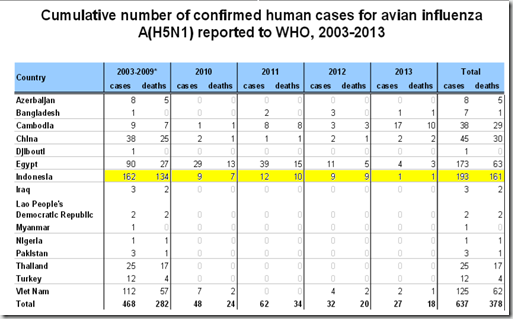 The narrative describes the patient as having been seen for fever, aches and back pain on September 18th, and treated as an outpatient until the 20th, when he was finally hospitalized.  The patients condition steadily worsened until the 25th, when he was placed in intensive care, and on the 26th – was finally suspected of having H5N1.

On the 27th, after a week in the original facility, he was transferred to Friendship Hospital, where he died the same day.  The high case fatality rate in Indonesia (83% compared to global average of 59%) may be due - in part - to delays in diagnosis and the providing of treatment with antivirals.


The epidemiological investigation indicates that exposure may have come from racing pigeons raised in his neighborhood.

Ministry of Health, Directorate General of Disease Control and Environmental Health announced a new case of H5N1 have been confirmed by the Center for Biomedical and Healthcare Technology Association, Balitbangkes.

Case on behalf of the U.S. (Male, 28 years) who Cibitung, Bekasi, West Java Province, is a bottled water company driver.

Chronology of the case, on 16 September 2013 starting symptoms of fever, aches and back pain. Then, on 18 September 2013, the case of outpatient treatment to one of the private hospitals in Bekasi. But because there is no change, the case back for treatment and was admitted to the hospital on 20 September 2013.

In hospital care, the rising fever accompanied by cough and shortness. On 25 September 2013 the disease more severe cases, fever and increasingly crowded conditions, and cases in intensive care in the ICU. The next day on 26 September 2013 in the morning, suspected cases of suspected bird flu. Subsequently, the case was referred to the Friendship Hospital for treatment on 27 September 2013. However, the case died at about 20:10 pm on the same day.

Epidemiological investigations have been carried to the hospital, the case and the surrounding environment by the Ministry of Health Integrated Team, Team Ministry of Agriculture, Department of Animal Husbandry and Health Department of West Java Province, Department of Health and Bekasi District Veterinary Office, obtained the possible risk factors for contact environment, with ornamental birds and in the case of pigeons. Furthermore, approximately 50 feet in front of the house there is a court case that once a week is used as an arena for pigeon racing. In addition, around the neighborhood there are many cases of birds, especially pigeons were maintained by the residents.

With the increase of these cases, the cumulative number of bird flu in Indonesia since 2005 until this news broadcast is 194 cases with 162 deaths.

Director General of Disease Control and Environmental Health, Prof.. dr. Tjandra Yoga Aditama as the focal point of the International Health Regulations (IHR) has been informed about the case to the WHO.

Posted by Michael Coston at 6:03 AM