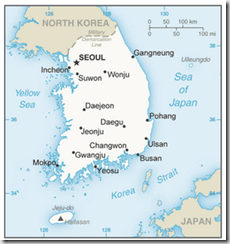 Ten days ago in Korea Detects H5N8 Antibodies In Farm Dog we learned of a single dog at a farm in Chungcheongnam-do province that had tested positive for antibodies to the H5N8 avian flu virus, which emerged in that country’s poultry flocks last January (see South Korea: 30 Days Into Their H5N8 Outbreak).


Antibodies to a virus generally rise a couple of weeks after exposure, and are considered a solid indicator of past infection (either symptomatic or sub-clinical).

While not terribly common, we’ve seen dogs (and other non-avian species) infected with novel avian influenzas in the past.  In late 2012, in China: Avian-Origin Canine H3N2 Prevalence In Farmed Dogs, we looked at a study that found a newly emergent avian origin H3N2 virus prevalent in pet and farmed dog populations in southern China.

Although we’d seen reports of a handful of similar infections with the avian H5N1 virus during the last decade (see Study: Dogs And H5N1), canines were not generally believed very susceptible to `humanized’  flu strains.  That is, until we began seeing dogs infected with the 2009 pandemic H1N1 virus (see Companion Animals And Novel H1N1).

The concern is that  viruses are given new opportunities to evolve, adapt and mutate when they jump species, which led the author of a 2008 EID study - Transmission of Avian Influenza Virus (H3N2) to Dogs - to write:

All of which serves as prelude to a new status report from Korea’s Ministry of Food, Agriculture and Rural Affairs  that now raises to 11 the number of  dogs, from two farms, that have tested positive for the H5N8 virus. First a somewhat cryptic (machine translated) snippet from that report (h/t Sharon Sanders @FluTrackers for the link), then some excerpts from a Yonhap News report.

( One pig inspection situation ) the current test results were all negative pigs , dogs , today (3:24 days) 2 farms (Cheonan one , give one ) in addition to antibodies (H5 type) have been identified.


So far, research results, this time in addition to detection of antibodies to the last two farms ( one 3:11 ) antibodies such as those listed in the case of dogs , as - Dogs are AI antibody was confirmed to be without symptoms, which detects antibodies to the virus has been exposed to the disease state is determined not to be caused by infection

The cases also marked the first time in the world in which infected dogs survived, according to officials from the Ministry of Agriculture, Food and Rural Affairs.

In addition to incrementing the number of birds culled since January over the H5N8 virus to more than 11 million, this article also makes mention of the first known H5N1 infection in dogs ( in Thailand in 2004) which was described in this 2006 Dispatch to the CDC’s EID Journal.

Fatal Avian Influenza A H5N1 in a Dog

We report a fatal H5N1 infection in a dog following ingestion of an H5N1-infected duck during an outbreak in Thailand in 2004. With new reports of H5N1 virus continuing across Asia, Europe, and Africa, this finding highlights the need for monitoring of domestic animals during outbreaks.

The list of zoonotic diseases (those shared between humans and animals) is long and continually expanding, and includes: SARS, Babesiosis, Borrelia (Lyme), Nipah, Hendra, Malaria, Hantavirus, Ebola, Bartonella, Leptospirosis, Q-Fever, bird flu and many, many others.

So understandably, anytime we see a virus – particularly a flu virus – jump species, it gets our attention.

And when they infect companion animals, such as dogs and cats, it becomes of even greater concern, because of how closely we humans interact with them.  For now, the H5N8 virus is only known to be pathogenic in avian species, and we’ve seen no evidence that it can infect humans.  And admittedly, that may never happen.

But as we learned earlier this month in EID Journal: Describing 3 Distinct H5N8 Reassortants In Korea, this emergent virus is a work in progress, and we can expect to see new variants and/or clades of the virus emerge over time.

New variants can behave differently, and so enhanced surveillance and vigilance is required, else we get blindsided by a virus coming out of left field.

The ability of novel influenza viruses to evolve, mutate, or reassort in a variety of hosts has been a frequent topic of discussion in this blog.  For more on this, you may wish to revisit:

Posted by Michael Coston at 7:21 AM