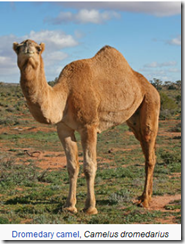 Over the past eight months we’ve seen a number of studies linking camels and the MERS virus, starting last August with Lancet: Camels Found With Antibodies To MERS-CoV-Like Virus, and continuing in December with The Lancet: Identification Of MERS Virus In Camels, and most recently with EID Journal: MERS Coronaviruses in Dromedary Camels, Egypt.

While the precise mechanism by which the MERS Coronavirus has come to infect humans isn’t yet known, increasingly camels are viewed as a probable suspect.

In late March CIDRAP News carried a report entitled WHO sees camels as MERS source, but route uncertain which summed up the evidence to that time.

Despite the mounting evidence, the Saudi Government has been slow to warm to the idea (see last week’s Saudi MOA Spokesman: Camel Link Unproven, MERS-CoV Is MOH Problem), and just yesterday the Saudi Minister of Health issued another denial:

NNA - Saudi Minister of Public Health said in a statement on Monday that it was still early to say that there was a relation between the coronavirus, known as Mers, and camels, unlike the findings of a study.

Saudi Arabia is the hotbed of the disease which claimed the lives of 68 out of 189 registered in 2012.

Here, the Saudi Minister seems to be denying any connection between camels and MERS, not just camels as being a possible route of human infection.

Camels are not only ubiquitous in Saudi Arabia, they are part of their national identity, and are fancied by the rich much in the way that thoroughbred races horses are in other parts of the world. So anything that implicates camels as the carrier of a deadly disease would likely be viewed as a political `hot potato’.

Making things considerably more difficult for the camel-link deniers, we have a new Dispatch – published yesterday in the CDC’s EID Journal – that reports on the examination of both camel calves and adults in two herds in Al-Hasa, where the virus was found to be present in, and shed by, a significant number of the animals.

Researchers also found that elevated antibody titers from previous exposures don’t appear to be very protective against reinfection with this virus and viral samples taken over a period of a month remained 100% genetically identical, indicating little or no mutation in the virus while circulating in camels.

Below you’ll find a link, and some excerpts from the EID study:

A prospective study of a dromedary camel herd during the 2013–14 calving season showed Middle East respiratory syndrome coronavirus infection of calves and adults. Virus was isolated from the nose and feces but more frequently from the nose. Preexisting neutralizing antibody did not appear to protect against infection.

The unusual genetic stability of MERS-CoV in dromedaries, taken together with its high seroprevalence (7,10–13), raises the hypothesis that dromedaries might be the natural host for this virus. Further longitudinal studies of MERS-CoVs in dromedaries are needed to confirm this hypothesis.

Genome organization of the dromedary MERS-CoV detected in this study was identical to that of the virus in humans. The virus strains clustered phylogenetically within clade B (9) and were most closely related to the strain MERS-CoV_FRA/UAE and to MERS-CoV detected in Buraidah (Saudi Arabia) and Al-Hasa (Figure). The farm is ≈300 km from United Arab Emirates and 600 km from Buraidah. Dromedaries move between Al-Hasa and Buraidah and, more limitedly, between Al-Hasa and United Arab Emirates.

The full-genome sequence of MERS-CoV from dromedaries in this study is 99.9% similar to genomes of human clade B MERS-CoV. The spike gene is the major determinant for virus host specificity. In comparison with other publically available human MERS-CoV sequences, we found 6-nt mutations in the spike gene unique to these dromedary viruses. Of these, 3 (S457G, L773F, and V810I) were nonsynonymous. These amino acid changes are located outside the binding interface between MERS-CoV spike protein and human DPP4 receptor, suggesting these amino acid differences are unlikely to affect receptor binding. Thus, these dromedary viruses may retain capacity to infect humans, as Chu et al. suggested for dromedary MERS-CoV in Egypt (4).

MERS-CoV may be isolated from nasal aspirates and feces, indicating that both could be possible sources of virus transmission to humans and other animals, but virus detection rates were higher in nasal swab specimens. Our preliminary data suggest that preexisting MERS-CoV antibody might not completely protect against re-infection; however, this question needs more investigation.

Genetic analysis of the MERS virus retrieved from humans suggests multiple introductions or `jumps’ from a host species to humans over the past two years (see PLoS Currents: State Of Knowledge & Data Gaps On MERS-CoV & Genome sequencing identifies multiple chains of MERS Co-V infection in humans).

While human-to-human transmission of the virus has been well documented, it does not yet appear to be fully efficient, giving rise to hopes that if you can identify and contain the virus in its host species, you might be able to prevent further outbreaks.


But for that to happen, you have to be willing to follow the scientific evidence, regardless of how inconvenient those findings might be.

Should the virus adapt well enough to humans to sustain transmission without the need for occasional re-seeding, the importance of the host species begins to diminish somewhat. But not entirely, as outbreaks can die out or be brought under control, even after efficient H2H transmission occurs (see SARS and Remembrance).

Which means that as long as MERS-CoV circulates in the wild, it is imperative that we understand the full ecology of the the virus.

Posted by Michael Coston at 6:02 AM