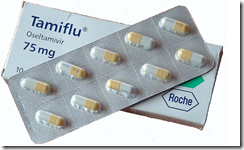 Hopefully today’s blog won’t be as tedious as the title might first suggest.

Oseltamivir (aka Tamiflu ®) – an NAI (Neuraminidase Inhibiting) antiviral drug – is our primary pharmaceutical weapon against influenza.   While it doesn’t `cure’  the flu - when started early enough (preferentially within 48 hrs of onset of symptoms) - it can reduce both the severity and duration of infection (see Effectiveness Of NAI Antivirals In Reducing Mortality In Hospitalized H1N1pdm09 Cases).


Up until the middle of the last decade, we had another class of antiviral drugs - M2 ion channel blockers (e.g. Amantadine, Rimantadine) –  which were first developed in the late 1950s. But excessive use over the years (including in agricultural settings) eventually led to widespread resistance.

The replacement antivirals introduced during the last decade include Oseltamivir (Tamiflu), Zanamivir (Relenza), and Peramivir. Of these, Oseltamivir is by far the most widely used, and has been stockpiled by many governments for use in the event of a pandemic.

While occasional instances of Oseltamivir resistance was recorded prior to 2007, in nearly every case, it developed after a person was placed on the drug (`spontaneous mutations’).  While of concern to the patient being treated, it occurred in only about 1% of treated cases, and studies suggested that these resistant strains were `less biologically fit’, and were therefore believed to be unlikely to spread.

Which of course, is exactly what they did do.  Between 2007 and 2008, the incidence of resistant seasonal H1N1 viruses literally exploded around the globe.

So much so, that by the end of 2008, nearly all of the H1N1 samples tested in the United States were resistant to oseltamivir and the CDC was forced to issue major new guidance for the use of antivirals (see CIDRAP article With H1N1 resistance, CDC changes advice on flu drugs).

This resistance was primarily due to an H275Y mutation - where a single amino acid substitution (histidine (H) to tyrosine (Y)) occurs at the neuraminidase position 275 (Note: some scientists use 'N2 numbering' (H274Y)).

While this mutation had been seen before, obviously something had changed between 2006 and 2008 to allow the resistant form of the virus to spread so quickly.

In 2010  Bloom, Gong & Baltimore discussed these `enabling’ changes in the Journal Science in  a report called Permissive Secondary Mutations Enable the Evolution of Influenza Oseltamivir Resistance.

The His274→Tyr274 (H274Y) mutation confers oseltamivir resistance on N1 influenza neuraminidase but had long been thought to compromise viral fitness. However, beginning in 2007–2008, viruses containing H274Y rapidly became predominant among human seasonal H1N1 isolates. We show that H274Y decreases the amount of neuraminidase that reaches the cell surface and that this defect can be counteracted by secondary mutations that also restore viral fitness.

Two such mutations occurred in seasonal H1N1 shortly before the widespread appearance of H274Y. The evolution of oseltamivir resistance was therefore enabled by “permissive” mutations that allowed the virus to tolerate subsequent occurrences of H274Y. An understanding of this process may provide a basis for predicting the evolution of oseltamivir resistance in other influenza strains.

This pervasive spread of resistant H1N1 would have been a much bigger deal had it not been for the arrival of the 2009 H1N1 pandemic virus, which effectively supplanted the old (resistant) H1N1, and replaced it with a new – but fortunately, still susceptible to NAIs – H1N1 virus.

Fast forward five years, and the (now seasonal, formerly pandemic) pH1N1 virus remains overwhelmingly susceptible to Oseltamivir and other NAI antiviral drugs, although we have seen a few signs of `creeping resistance’.

Reassuringly, the latest FluView report (week 12) indicated that of 4524 viruses tested this flu season in the United States, only 54 (1.2%) showed signs of NA Inhibitor resistance. 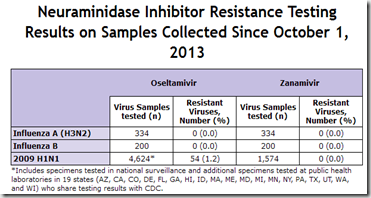 But we have seen a few worrisome clusters of NAI resistant flu (see Eurosurveillance: Community Cluster Of Antiviral Resistant pH1N1 in Japan & NEJM: Oseltamivir Resistant H1N1 in Australia), which has raised concerns that we could see a repeat of the 2007-2008 rise in antiviral resistance in our current H1N1 strain.

All of which serves as prelude to a new study that appears in PloS Pathogens, that looks at the potential of pH1N1 following the same course as its predecessor.  Their assessment is not particularly rosy.

Oseltamivir is relied upon worldwide as the drug of choice for the treatment of human influenza infection. Surveillance for oseltamivir resistance is routinely performed to ensure the ongoing efficacy of oseltamivir against circulating viruses.

Fair warning: the methods and materials section is lengthy, complex, and pretty tough sledding for those without a solid background in virology.  Those interested in the details (or with a masochistic bent) will want to read this report in its entirety.

The bottom line, however, is that since the 2009 H1N1 virus emerged five years ago, it has managed to pick up a series of `permissive’ mutations that are believed to increase its ability to replicate when it carries the H275Y resistance mutation.

Which in theory, should promote its spread.

Given that these mutations are already entrenched, it is a bit surprising we haven’t already seen an expansion in resistant pH1N1, beyond a couple of documented clusters in Australia and Japan.  The authors write:

In the most recent 2013/14 Northern Hemisphere influenza season, a cluster of A(H1N1)pdm09 H275Y OR viruses that contained both the V241I and N369K PPMs plus an additional N386K NA mutation, was detected in Sapporo, Japan [53], during a period of the season where A(H1N1)pdm09 viruses contributed approximately 50% of the circulating influenza strains [54].

We’ve just come through an H1N1 dominated flu season in North America, and the incidence of H274Y has remained low, so other factors may be involved. The authors suggest:

Apart from NA PPMs, it may be that other properties, such as antigenic novelty, are also necessary for an OR virus to spread widely. In 2007–2008, the H275Y NA mutation became fixed in a new seasonal A(H1N1) antigenic variant (A/Brisbane/59/2007-like), suggesting that the antigenic novelty of the OR virus assisted its prolific spread.

In this vein, the authors warn:

A(H1N1)pdm09 viruses have now been circulating in humans for over four years, but are yet to undergo a significant antigenic change (as evidenced by the continued inclusion of A/California/7/2009 in the human seasonal influenza vaccine since 2009).


The significance being that an antigenic change in the virus might be the spark needed to spread the resistant mutation, and at the same time would reduce the effectiveness of the current vaccine (and evade herd immunity), and therefore increase our need for effective antiviral medications.

Viruses and bacteria evolve and adapt very quickly. The sobering truth is pharmacological victories over them tend to be fleeting. New classes of drugs are going to be needed, along with prudent stewardship of the drugs currently in our arsenal.

The authors of this study wrap up by saying: