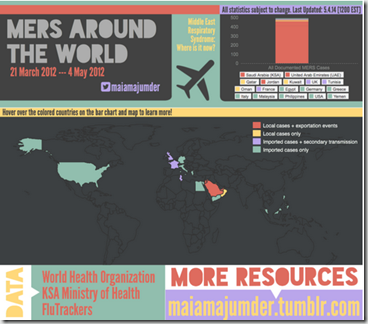 Several days ago on twitter Maia Majumder posited a unique method by which mild or asymptomatic carriers of the MERS virus might transmit the virus to others – particularly in a Middle Eastern hospital situation.  I confess, ever since hearing her idea, I’ve been intrigued.

Maia characterizes her idea as a SWAG, meaning she has no proof – just a hunch, but believes that the scenario deserves investigation.

Today I’m happy to say, she has fleshed out her ideas and has presented them on her blog Mens et Manus.   Follow the link to read:

Asymptomatic MERS has been a hot topic lately.

Since the onset of the current outbreak, 22% of all reported diagnoses – 60 of 279 total – have been asymptomatic. Of those 60, over half of them have been healthcare workers (HCW) [1].

While you are at Mens et Manus, take the time to look at Maia’s other offerings, including her interactive MERS map at and her tumblr account http://maiamajumder.tumblr.com/.

Posted by Michael Coston at 4:34 AM