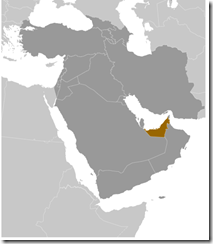 In the latest of a string of press releases from Abu Dhabi Health Authority (HAAD), we are reassured that `6 cases diagnosed with MERS Coronavirus tested negative’ – meaning they have cleared their viral infection and can now leave isolation.  Good news, obviously.

But almost as an afterthought, roughly halfway through the announcement, we learn that four more cases have been identified and are in isolation.

The tally of cases in this spring outbreak in the UAE remains murky, although based on FluTracker’s MERS Case List and the Global Alert & Response (see below) updates from the WHO,  the number appears to now exceed 40.  Unlike with Saudi Arabia, we rarely get any patient information until the UAE officially notifies the World Health Organization.

The Health Authority – Abu Dhabi (HAAD) is pleased to announce that 6 more of the individuals who are in isolation in hospital with MERS Coronavirus (MERS-CoV) have now tested negative for the virus, and will be leaving hospital soon. With this, the number of negative tested individuals has risen to 27.

HAAD said that these 6 cases were kept in isolation at hospitals as a precautionary measure. They were able to clear the virus within 10 -14 days themselves without any treatment.

It is expected that the other individuals with positive MERS Coronavirus currently in isolation in hospitals will likewise soon test negative and be able to go home. They are being tested daily to check on their positive status.

HAAD also announced 4 new cases with MERS-CoV. Most have either no symptoms or mild symptoms, and are expected to clear virus soon. They have been admitted to hospital for isolation until they clear the virus.

HAAD confirmed that it is coordinating with the Ministry of Health (MOH) and other Authorities in the country, and has taken all necessary measures as per international standards and recommendations from the World Health Organisation (WHO).

HAAD has been engaging world authorities from expert international organizations who are now in Abu Dhabi to help shed light on various aspects of the virus, including modes of transmission, and best practice in managing viral infections of this type.

The MOH stated that the WHO confirmed the virus is not a concern for public health at the moment, and that the current situation does not require a travel ban to any country in the world, screenings at different ports, or any restrictions on trade.

The MOH confirmed that it is monitoring the situation closely to ensure the health and safety of everyone.