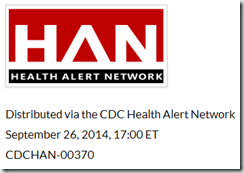 There are a fair number of possible causes for a cluster of acute neurological illness in children, ranging from vector-borne encephalopathies like West Nile Virus, to a variety of polio and non-polio enteroviruses. In recent years, EV-71 has been linked to a number of clusters of AFP (acute flaccid paralysis) around the globe, particularly in Asia, Australia, and the Pacific (see Australia: Acute Flaccid Paralysis & EV71).

A month ago, when the EV-D68 virus was first identified in a cluster of sick kids in the Midwest (see Kansas City Outbreak Identified As HEV 68), I mentioned that this rarely reported non-polio enterovirus had been detected in two of five children who developed a rare polio-like syndrome last winter (see Acute Flaccid Paralysis Cases In California) .

While this may have simply been an incidental finding, due to the history of other non-polio enteroviruses to cause neurological illness, EV-D68 infection was considered at least plausible cause for these illnesses. The CDC has frequently stated that  `EV-D68 causes primarily respiratory illness, although the full spectrum of disease remains unclear.’ 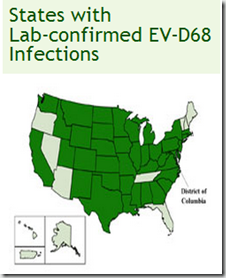 The EV-D68 virus has now spread to more than 40 states, and has likely sickened tens of thousands of children, but until now we’d not heard any credible reports of EV-D68 infected children developing neurological symptoms. Testing for the virus, however, is both difficult and time consuming – and the battery of tests required to rule out other causes of neurological illness can take considerable time – and so there are often lags in reporting.

Given the recent surge in enterovirus infections across the nation, and their history of occasionally producing neurological illness, it is not altogether surprising that health authorities in Denver, Colorado have now reported a cluster of children presenting with acute neurological symptoms following recent respiratory infections.

To date, four of nine have tested positive for the EV-D68 virus.

With the caveat that the etiology remains unknown, the CDC is anxious to identify other recent cases or clusters, and to nail down the cause (or causes) of these illnesses.

Last night the CDC issued the following HAN (Health Alert Network)  Advisory to clinicians, with instructions on reporting and recommendations for testing.

The Centers for Disease Control and Prevention (CDC) is working closely with the Colorado Department of Public Health and Environment (CDPHE) and Children’s Hospital Colorado to investigate a cluster of nine pediatric patients hospitalized with acute neurologic illness of undetermined etiology. The illness is characterized by focal limb weakness and abnormalities of the spinal cord gray matter on MRI. These illnesses have occurred since August 1, 2014 coincident with an increase of respiratory illnesses among children in Colorado. The purpose of this HAN Advisory is to provide awareness of this neurologic syndrome under investigation with the aim of determining if children with similar clinical and radiographic findings are being cared for in other geographic areas. Guidance about reporting cases to state and local health departments and CDC is provided. Please disseminate this information to infectious disease specialists, intensive care physicians, pediatricians, neurologists, radiologists/neuroradiologists, infection preventionists, and primary care providers, as well as to emergency departments and microbiology laboratories.

The CDPHE, Children’s Hospital Colorado, and CDC are investigating nine cases of acute neurologic illness among pediatric patients. The cases were identified during August 9–September 17, 2014 among children aged 1–18 years (median age 10 years). Most of the children were from the Denver metropolitan area. All were hospitalized. Common features included acute focal limb weakness and specific findings on magnetic resonance imaging (MRI) of the spinal cord consisting of non-enhancing lesions largely restricted to the gray matter. In most cases, these lesions spanned more than one level of the spinal cord. Some also had acute cranial nerve dysfunction with correlating non-enhancing brainstem lesions on MRI. None of the children experienced altered mental status or seizures. None had any cortical, subcortical, basal ganglia, or thalamic lesions on MRI. Most children reported a febrile respiratory illness in the two weeks preceding development of neurologic symptoms. In most cases, cerebrospinal fluid (CSF) analyses demonstrated mild-moderate pleocytosis (increased cell count in the CSF) consistent with an inflammatory or infectious process. CSF testing to date has been negative for West Nile virus and enteroviruses, including poliovirus. Nasopharyngeal specimens were positive for rhinovirus/enterovirus in six out of eight patients that were tested. Of the six positive specimens, four were typed as EV-D68, and the other two are pending typing results. Testing of other specimens is still in process. Eight out of nine children have been confirmed to be up to date on polio vaccinations. Epidemiologic and laboratory investigations of these cases are ongoing.

The United States is currently experiencing a nationwide outbreak of EV-D68 associated with severe respiratory disease. The possible linkage of this cluster of neurologic disease to this large EV-D68 outbreak is part of the current investigation. CDC is seeking information about other similar neurologic illnesses in all states, especially cases clustered in time and place. CDC has particular interest in characterizing the epidemiology and etiology of such cases.

Posted by Michael Coston at 6:27 AM