As the West African Ebola epidemic continues unabated, countries around the world must prepare for the possibility that an infected traveler might arrive unannounced on their shores.  Having a working and deployed public health system – and a criteria for identifying infected cases and their potential contacts – greatly limits the potential for any major outbreaks in developed countries.

The CDC has already released, and updated, their Interim Ebola Case Definitions, as has Canada (National Case Definition: Ebola Virus Disease (EVD)).  Both are works in progress and are subject to revision as more is learned.


Today the ECDC has offered their interpretation (see below).   And while all three of these case definitions involve many of the same criteria, there are some interesting differences between CDC & ECDC assessments, particularly in what constitutes a `High Risk’ exposure. 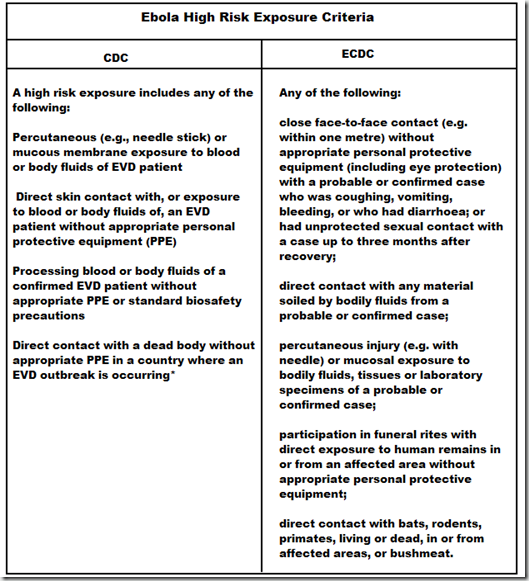 As you can see, the ECDC’s list of High Risk exposures is longer, and more encompassing, than is the CDC’s. Unlike the CDC, the ECDC does not elucidate what constitutes `Low Risk’ exposures.

The CDC considers the following scenarios to present a `Low Risk’ of infection.

A low risk exposure includes any of the following

With the added proviso that the suspected or confirmed Ebola patient in question is `coughing,  vomiting, bleeding, or who had diarrhoea’  - being within 1 meter of an EVD patient is considered to have a High Risk of exposure by the ECDC; essentially recognizing the risks of droplet transmission of the virus.

The potential of  droplet transmission of Ebola is something we’ve discussed before, and was well addressed by Dr. Ian Mackay et al. in VDU Blog: Droplets vs Airborne - Demystifying Ebola Transmission.

While one can debate the `reasonableness’ of either criteria (particularly given the different populations and geographic regions involved), the differences between them – and between the various PPE standards we’ve also seen used for or recommended for use with Ebola – risk creating an environment of confusion and distrust among both the public, and healthcare workers.

Here is the ECDC’s release in its entirety:

​A case definition for reporting cases of Ebola virus disease in the EU has been released by ECDC. The definition aims to classify cases for epidemiological reporting and not to guide investigation or clinical management of cases.

Although developed in response to the outbreak of Ebola virus disease currently affecting West Africa, the case definition is broad enough to apply to any case of EVD.

Only confirmed cases are to be reported at the European level, although the newly published case definition does include a 'probable case' definition.

By releasing the case definition and related algorithms, ECDC works to support EU Member States in their preparedness for a quick and effective response to any situation that may potentially involve an EVD case.

Any person currently presenting or having presented before death:

AND any of the following:

OR a person who died suddenly and inexplicably

Any of the following:

In the 21 days before the onset of symptoms:

Any of the following:

Only confirmed cases are to be reported at the European level using the EWRS. The 'probable case' classification is provided for information only.

Posted by Michael Coston at 8:31 AM