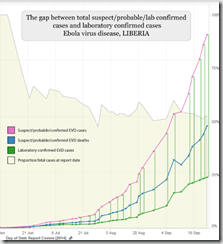 I have a theory.


This theory is meant only to apply to disease outbreak/epidemic/pandemic situations, and then only to those which include fatal cases.


This theory of mine has only emerged since I've been plotting Ebola virus cases numbers from the West African epidemic. I precede the explanation with the caveat that there is very probably already a well developed, well-known actual epidemiology term to describe this theory. But I'm not a trained epidemiologist and this is just a blog, so please forgive me my ignorance.


The theory goes that when a gap grows between the number of new cases being reported and the number of deaths or laboratory confirmations in that population, despite the outbreak having been going for a while, this represents an indication that control of the situation is slipping, or has been lost.