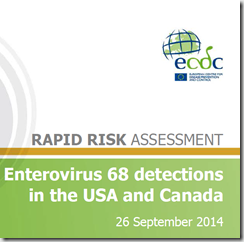 The outbreak of EV-D68 – an (up-till-now) rarely seen non-polio enterovirus infection – continues in North America with more than 40 states and several provinces in Canada reporting cases.

While most of those infected (primarily children) will only experience a mild-to-moderate `cold’, a small percentage have been made sick enough to require hospitalization and even require ventilatory support (see CDC Update On EV-D68 – Sept 25th).


Late on Friday the EV-D68 story took another turn when the CDC announced it was investigating – along with Colorado Health officials – a cluster of 9 children presenting with neurological illness of unknown etiology, and that EV-D68 was on the short list of possible causes (see CDC HAN: Acute Neurologic Illness with Focal Limb Weakness of Unknown Etiology in Children).

Although primarily associated with respiratory symptoms, EV-D68 has been tentatively implicated in neurological presentations in the past, including last winter (see Acute Flaccid Paralysis Cases In California) . An investigation is now underway to determine the cause of this cluster in Denver, and to see if there are similar cases in other regions of the country.

While small outbreaks of EV-D68 have been reported in the past – particularly in Asia, the Pacific, and in parts of Europe – this North American outbreak is the largest ever documented.

That said, EV-D68 is rarely tested for, and generally not considered a `notifiable disease’, and so its actual incidence around the globe is probably greatly underappreciated.

Taking note of these events, and knowing that infectious diseases perfectly capable of crossing oceans, the ECDC has today released their Rapid Risk Assessment: Enterovirus 68 detections in the USA and Canada.

The result is a detail-rich history of the virus,  a terrific chart of older outbreaks over the past decade, and an extensive list of journal references and citations.

I’ve only posted their main conclusions, so follow the link to read the report in its entirety.  When you come back, I’ll have a bit more on one possible reason why this outbreak may be spreading so rapidly.

Enterovirus 68 detections in the USA and Canada

Buried within this report is a one-line mention and a reference to a study, published late last year, which looked at recent genetic changes to EV-D68:

The study, published in the Journal of Virology, finds that the EV-D68 virus has evolved into at least three lineages and that they all bind preferentially to α2-6 SAs – the same receptor cell used to great effect by seasonal influenza viruses. They also suggest that relatively recent changes in its antigenicity and/or receptor binding properties may be increasing its prevalence around the globe.

Increased detection of enterovirus 68 (EV68) among patients with acute respiratory infections has been reported from different parts of the world in the late 2000s since its first detection in pediatric patients with lower-respiratory-tract infections in 1962. However, the underlying molecular mechanisms for this trend are still unknown. We therefore aimed to study the antigenicity and receptor binding properties of EV68 detected in recent years in comparison to the prototype strain of EV68, the Fermon strain.

We further studied receptor binding specificities of EV68 strains for sialyloligosaccharides using glycan array analysis. In glycan array analysis, all tested EV68 strains showed affinity for α2-6-linked sialic acids (α2-6 SAs) compared to α2-3 SAs. Our study demonstrates that emergence of strains with different antigenicity is the possible reason for the increased detection of EV68 in recent years. Additionally, we found that EV68 preferably binds to α2-6 SAs, which suggests that EV68 might have affinity for the upper respiratory tract.

IMPORTANCE Numbers of cases of enterovirus 68 (EV68) infection in different parts of the world increased significantly in the late 2000s. We studied the antigenicity and receptor binding properties of recently detected EV68 strains in comparison to the prototype strain of EV68, Fermon. The hemagglutination inhibition (HI) and neutralization (NT) titers were significantly different between strains of different genetic lineages among recently detected EV68 strains.

We further studied receptor binding specificities of EV68 strains for sialyloligosaccharides using glycan array analysis, which showed affinity for α2-6-linked sialic acids (α2-6 SAs) compared to α2-3 SAs. Our study suggested that the emergence of strains with different antigenicities was the possible reason for the increased detections of EV68 in recent years. Additionally, we revealed that EV68 preferably binds to α2-6 SAs. This is the first report describing the properties of EV68 receptor binding to the specific types of sialic acids.

An intriguing and plausible – but as yet, unproven – explanation for the rapid and (as far as we know) unprecedented spread of EV-D68 in North America.

But one that will require considerable laboratory analysis and study to prove one way or another.

Posted by Michael Coston at 6:59 AM