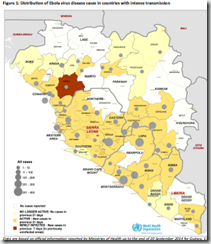 While the news continues to run good out of Nigeria and Senegal, where earlier introductions of the Ebola virus appear to have been successfully contained, today’s report shows a jump of over 500 cases since last Thursday’s report from Sierra Leone, Liberia, and Guinea.


The `reporting through’ date for each country varies (20th for Guinea, 17th for Liberia, and 19th for Sierra Leone), and it isn’t clear how much of the outbreak in actually reflected in these numbers.

Some people on the ground have estimated the real burden of Ebola in the hot zone could be double or triple what the official numbers suggest.

The other hint of good news is that the numbers coming out of the unconnected Ebola outbreak in the DRC don’t appear to be escalating at this time.

I’ve only posted excerpts from today’s report, follow the link to read:

Following the roadmap structure1, country reports fall into two categories: those with widespread and intense transmission (Guinea, Liberia, and Sierra Leone); and those with an initial case or cases, or with localized transmission (Nigeria, Senegal). An overview of the situation in the Democratic Republic of the Congo, where a separate, unrelated outbreak of Ebola virus disease (EVD) is occurring, is also provided (see Annex 1).


1. COUNTRIES WITH WIDESPREAD AND INTENSE TRANSMISSION 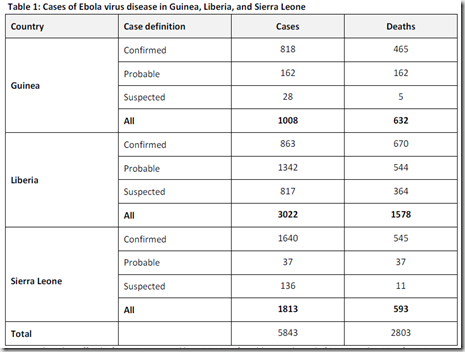 ANNEX 1. EBOLA OUTBREAK IN THE DEMOCRATIC REPUBLIC OF THE CONGO


432 contacts have now completed 21-day follow-up. Of 488 contacts currently being monitored, 468 (96%) were seen on 18 September, the last date for which data has been reported. This outbreak is unrelated to that affecting Guinea, Liberia, Nigeria, Senegal and Sierra Leone.