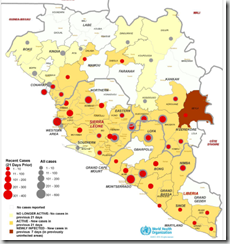 In a sane world, an official could at least raise the possibility of low probability-high impact event without it being blown all out of proportion by the press, the internet, and through osmosis -  the public.

And so any acknowledgement of an infinitesimal risk – such as an asteroid strike,  a Yellowstone eruption, or `airborne Ebola’-  becomes instant fodder for the media and pure manna for conspiratorialists worldwide.

This,  is why we can’t have adult discussions anymore.  At least not in public.

Admittedly, Banbury should have known better than to go there. He had to have known how this would have been played in the press, and he (hopefully) knows just how low the risk of that sort of outcome really is. Not zero, but pretty darn close.

Yes, in a rational universe, we should be able to discuss all possibilities – no matter how remote.

But we don’t live in one of those.   So officials have to watch what they say very carefully.  Too carefully, in my opinion.

Today the UN Mission for Ebola Emergency Response has issued the following clarification.

UN Mission for Ebola Emergency Response statement for clarification: No threat that Ebola is airborne

Following recent media reports, the UN Mission for Ebola Emergency Response (UNMEER) seeks to clarify that Ebola is not an airborne disease. At this point in time we have no evidence and do not anticipate that the Ebola virus is mutating to become airborne.


However, there are real risks and concerns with this outbreak: every day more people are becoming infected and more are dying because they cannot get the care they need. Energy needs to be focused on swiftly addressing the real needs and gaps in communities affected by this disease.


The Ebola virus only spreads through contact with bodily fluids. The World Health Organization (WHO) monitors the virus closely. Viruses do mutate but it is a complex process that takes time. Right now, as advised by WHO, the safest thing anyone can do is avoid direct contact with bodily fluids of people who have Ebola, and with surfaces and materials (e.g. bedding, clothing) contaminated with fluids.