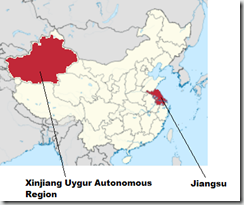 During its first two waves, China’s H7N9 outbreak had been restricted to the Eastern half of their country, with the bulk of cases occurring along the Eastern seaboard.  In August of this year things changed when we saw the virus reported twice in Xinjiang, China’s westernmost province/autonomous region.

Since then (including today), of the eight cases reported this fall, half have come out of Xinjiang.

First an excerpt from Hong Kong’s CHP notification of two cases, thousands of miles apart, then I’ll be back with a little more.

The Centre for Health Protection (CHP) of the Department of Health (DH) today (November 15) received notification from the National Health and Family Planning Commission of two cases of human infection of avian influenza A(H7N9) affecting a woman aged 54 in Xinjiang Uygur Autonomous Region and a woman aged 45 in Jiangsu. The 54-year-old woman passed away early this month.

"Locally, we will remain vigilant and work closely with the World Health Organization and relevant health authorities to monitor the latest developments," a spokesman for the DH said.


"In view of cases confirmed on the Mainland, members of the public should maintain good personal, food and environmental hygiene at all times during travel," the spokesman urged.


"All boundary control points have implemented disease prevention and control measures. Thermal imaging systems are in place for body temperature checks of inbound travellers. Suspected cases will be immediately referred to public hospitals for follow-up investigation," the spokesman added.

The slow trickle of cases reported this fall is consistent with what we were seeing this time last year (see chart below), during the lead up to the peak of the 2nd wave in January and February. 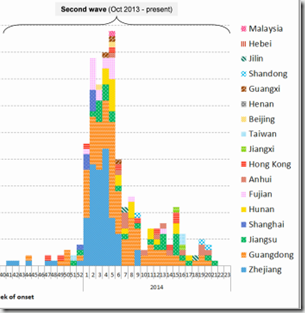 The jump to Xinjiang Uyghur Autonomous Region not only moves the viral chess pieces across the full 5000 km breadth of China, it places countries that border Xinjiang (Russia, Mongolia, Kazakhstan, Kyrgyzstan, Tajikistan, Afghanistan, Pakistan and India) on notice as well.

Last week’s surprise appearance of H5N8 in Germany and this week in Japan demonstrates just how little regard avian viruses have for borders, oceans, or distance (see Bird Flu Spread: The Flyway Or The Highway?).

As a low pathogenic stealthy virus in birds – but a highly pathogenic virus in humans – H7N9 is unique among the avian influenzas, and that makes it doubly hard to control. Often, our first clue that the virus has arrived in a region comes when a human – in close contact with poultry – falls ill.


While the H7N9 virus transmits well from bird to human, it has not yet figured out how to transmit efficiently from human to human.  It has, however, morphed into dozens of clades and variants over the past two years, and as long as it continues to throw the genetic dice, it has the potential to roll a natural.

While past performance is no guarantee of future results, most experts expect the H7N9 virus to flare up again this winter.  And this year, we are also watching several new avian flu subtypes with outbreak potential, including H5N3, H5N6, H5N8 and H10N8.

Posted by Michael Coston at 7:27 AM