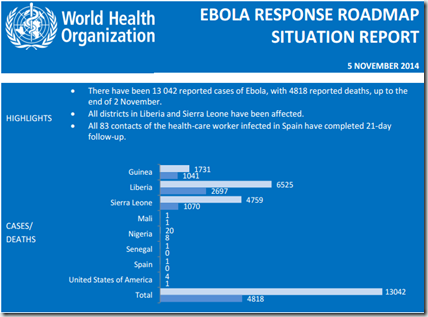 The numbers coming out of West Africa’s Ebola epidemic have never been particularly credible – with huge, acknowledged gaps in both surveillance, reporting.  And as we’ve seen over the past few weeks, reassessments and reviews of the data sometimes result in unexpected swings in the data.

Despite ample evidence that new cases are showing up every day, today the World Health Organization’s  latest Ebola roadmap report shows almost 700 fewer cases than was reported a week ago, and nearly 100 fewer deaths.

One very disturbing area where the numbers have not gone down are the number of HCWs (Healthcare workers) either infected, or killed by this outbreak.  Today’s tally shows 25 more HCW infections, and 38 HCW deaths reported over what was reported a week ago – although it isn’t clear exactly when these individuals were infected or died.

Use this link to download the entire 12-page report.

Posted by Michael Coston at 2:27 PM