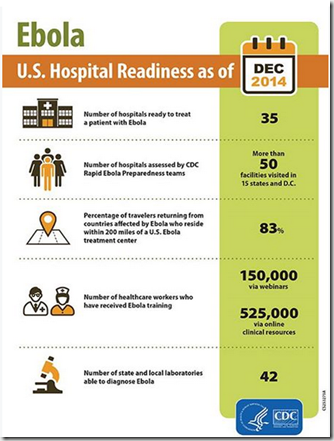 While we’ve not seen the oft-predicted deluge of Ebola cases entering this country, the fact remains that as long as the virus continues to circulate out of control in West Africa, the risks of seeing imported cases will continue.

Which is why so much effort has gone into producing guidance, and training materials, for healthcare workers across the nation (see CDC Ebola Guidance: Web Based PPE Training).

The CDC today has released a series of interim guidance documents, and fact sheets, on the nation’s efforts to prepare medical facilities to receive, identify, and safely treat Ebola cases. Much of this information will be of interest primarily only to state and local health departments and frontline healthcare facilities.

Interim Guidance for U.S. Hospital Preparedness for Patients with Possible or Confirmed Ebola Virus Disease: A Framework for a Tiered Approach - December 2, 2014

The HHS has also published a press release naming 35 hospitals around the country that have been designated Ebola Treatment centers.  This list will be updated each week, as more hospitals are set up to receive and treat Ebola patients.

An increasing number of U.S. hospitals are now equipped to treat patients with Ebola, giving nationwide health system Ebola readiness efforts a boost.  According to the Centers for Disease Control and Prevention (CDC), state health officials have identified and designated 35 hospitals with Ebola treatment centers, with more expected in the coming weeks.

Hospitals with Ebola treatment centers have been designated by state health officials to serve as treatment facilities for Ebola patients based on a collaborative decision with local health authorities and the hospital administration.

Ebola treatment centers are staffed, equipped and have been assessed to have current capabilities, training and resources to provide the complex treatment necessary to care for a person with Ebola while minimizing risk to health care workers.

“We continue our efforts to strengthen domestic preparedness and hospital readiness. I am pleased to announce that 35 hospitals have been designated by state health officials as Ebola treatment centers that are prepared, trained, and ready to provide care for a patient with Ebola,” said Health and Human Services Secretary Sylvia M. Burwell.

More than 80 percent of returning travelers from Ebola-stricken countries live within 200 miles of an Ebola treatment center. During their active monitoring, state or local public health authorities communicate every day with potentially exposed individuals to check for symptoms and fever for the 21 day incubation period of the Ebola virus.

This list will be updated weekly. The 35 hospitals with Ebola treatment centers as of 12/2/2014 are:

Posted by Michael Coston at 3:09 PM