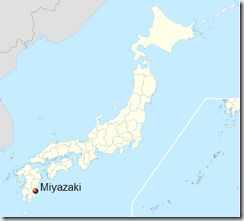 After the earlier reports from Germany & Canada along with continued media chatter out of Egypt, I’d say this is turning out to be a busy bird flu Monday - except it is already Tuesday in Japan - where a farm in the far South of the country is currently under suspicion of having an outbreak of H5 avian flu.

Based on the somewhat cryptic machine translations, a farm in Miyazaki where some birds have recently died has tested positive for avian flu, although the exact subtype has yet to be determined.

Over the past month we’ve been monitoring the arrival of H5N8 infected migratory birds to their winter nesting grounds in southern Japan (see Japan: H5N8 Detected In Izumi Crane & H5N8 In Migratory Bird Droppings) and local poultry farms have been on high alert.

Japan saw a brief incursion of the H5N8 virus last April while South Korea was battling against multiple outbreaks (see Japan’s Avian Flu Outbreak Identified As H5N8 ). More reliable test results – which should provide subtyping -  should be available in the next few hours.

A pair of reports:.

Bird flu: to detect the H5 from chicken poultry farm in Miyazaki Nobeoka

Miyazaki Prefecture on the 16th, has announced that it has detected the avian influenza virus H5 type in genetic testing from chickens that died in the poultry farm of Nobeoka Kitagawa-cho. Is good that there is a high possibility of highly pathogenic, county and city on the 16th 2:30, began culling of about 4000 birds that have been raised in this poultry farm. The county was set to 3 km radius within the movement restricted areas of chicken, radius of 10 kilometers a carry-out restricted areas.
Related article

According to the county animal husbandry nascent Promotion Bureau, the 14th in this poultry farm, died 10 chickens, but agricultural cooperatives staff did a simple test positive reaction was not out. Died newly 19 birds in the 15th. Showed that simple test by sending them two birds alive and 3 birds in Nobeoka Livestock Hygiene Service Center (city), positive reaction was out of the three birds that died. Showed that genetic testing in the three birds Miyazaki Livestock Hygiene Service Center (Miyazaki), it was confirmed virus.

In response to that positive reaction of avian influenza in the simple test from chicken poultry farm in Miyazaki Prefecture Nobeoka came out, the Ministry of Agriculture, Forestry and Fisheries is the early morning of the 16th, was held emergency epidemic prevention headquarters.

Nishikawa agricultural minister: "for the spread of the disease (spread) prevention, because initial response is more important than anything, and I would like you to cope with tightening the care are placed in Dear"

MAFF, highly pathogenic If it turns out that the bird flu, as well as carry out the slaughter of chicken about 4000 birds that have been raised in this farm, we want to strengthen the disinfection of peripheral.

Posted by Michael Coston at 2:28 PM