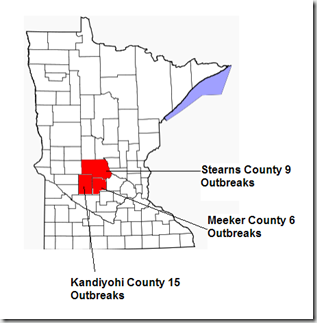 30 of 44 Minnesota Farms Are from 3 Counties


With H5N2 reported in 16 states, and 44 farms affected in Minnesota alone, the question over exactly how this virus is moving through so many farms – despite enhanced biosecurity – looms large.  Migratory birds are viewed as having introduced the virus to the local environment, but how they would have infected so many farms is unknown.

Human activity (such as the movement of people, products, or equipment between farms) may factor into some of these outbreaks, but thus far investigators have not announced this to be the case.

One idea under consideration is possibility that the virus could at times become `airborne’, carried by dust and spread by the wind from farm to farm.  While the evidence for this is occurring with bird flu scant right now, this isn’t a new idea, and has been proven to occur with other viruses. 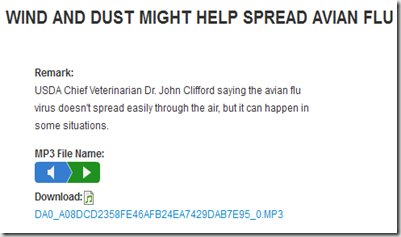 Although there is a good deal of division over whether this actually happens in the real world, we have a fair amount of `supportive’ information suggesting it is possible.  The science of all of this even has a name; aerobiology – the study of how bacteria, fungal spores, pollen and even viruses can be passively transported in the air.

Pollen, fungal spores, and even bacteria are usually hardier organisms than viruses, and the ability of the wind to disperse these types of organic particles intact over considerable distances is already well established.

Viruses, however, are more prone to desiccation, and UV damage – are unable to replicate outside of a suitable host – and are therefore considered more `fragile’.   Despite these limitations we’ve seen some research indicating that avian flu viruses – under the `right conditions’ – can persist in the environment for impressive periods of time.

During the summer of 2010, in a blog called Of Ducks, And Feathers, And H5N1 we looked at a study that determined that the H5N1 virus may persist on the dropped feathers from infected ducks and that they may spread the virus to the environment.

Also in 2010 (see Viruses Blowin’ In The Wind?)  we saw a report in the journal Environmental Health Perspectives, that suggested that it was possible for H5N1 (or any Influenza A virus) to be transported across long (hundreds of kilometers) distances in the air.

Although researchers demonstrated influenza RNA could be detected in ambient air samplings, they didn’t establish that the virus remained viable over long distances.

In early 2012 we looked at a study published in the journal Influenza and Other Respiratory Viruses that examined environmental samples taken in Cambodia between April 2007 and February 2010 during several bird flu outbreaks (see Environment: a potential source of animal and human infection with influenza A (H5N1) virus Gutiérrez, Buchy et al.)

Out of 246 samples taken around farms with outbreaks, 19% of dust, mud and soil samples showed contamination from the H5N1 virus, although it was not known if those viruses remained viable.

Again, in 2012, in EID Journal: Persistence Of H5N1 In Soil, we looked at a study that found that some types of soil are more conducive to avian flu virus survival than others, with composted soil being particularly effective.

More on point, in December of 2012  (see Barnstorming Avian Flu Viruses?) we looked at a study in the Journal of Infectious Diseases called Genetic data provide evidence for wind-mediated transmission of highly pathogenic avian influenza that found patterns that suggested farm-to-farm spread of the 2003 H7N7 in the Netherlands due to the prevailing wind.

Another study of the same outbreak, Modelling the Wind-Borne Spread of Highly Pathogenic Avian Influenza Virus between Farms (PloS One 2012), found that windborne transmission could have accounted for up to 24% of the transmission over distances up to 25 km.

While fascinating, perhaps even compelling, all of these studies are lacking a `smoking gun’ ; proof that viable avian flu viruses have been carried meaningful distances on dust or debris to infect another region.

Nevertheless, we’ve seen numerous instances where the `dust’ (desiccated chicken manure, feathers, etc.) from chicken farms has been strongly suspected as having spread bird flu – at least for a distance of several hundred yards.  For some human bird flu cases in Indonesia and China, the only known exposure has been listed as living near, or simply walking past, a poultry farm or live market.


While scientists are still divided over the `windborne spread’ of avian flu, a couple of pieces of addtiional evidence to consider are that  the USDA/APHIS Overview of the FMD Response Plan: The Red Book lists Foot & Mouth Disease (FMD) as being windborne, stating:

FMDV has also been known to spread through windborne transmission, where the virus infects naïve animals located some miles from known infected animals without any history of contact. The distance of windborne transmission over land surfaces depends on the atmospheric conditions and the amount of virus emitted into the air by the infected animals. Sources suggest FMDV may spread to distances of approximately 60 kilometers over land in favorable conditions and potentially even greater distances over water.

In 2008, when I first wrote about the possible spread of bird flu long distances on the wind, I was admittedly pretty skeptical of the idea.  Today, with a lot more supportive research available, the idea that avian flu viruses might be transported for tens of miles on the wind doesn’t seem as far fetched.

Proving it, however, isn’t going to be easy task.

According to a CIDRAP NEWS report last night, however, (see USDA hopes weather will help as H5N2 outbreaks mount) co-authored by Robert Roos and Lisa Schnirring, the USDA is investigating the possibility of commissioning an air sampling study to look for the virus near infected farms.

Hopefully this research will get green-lighted, and will lead to some definitive answers on how these viruses are hop scotching their way across the Midwest farmscape.