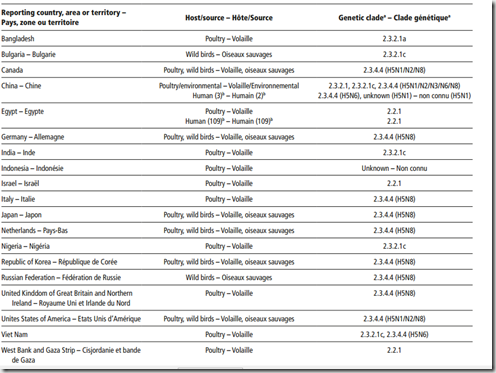 H5 Clade Diversity Around the Globe – Credit WHO


We’ve discussed the immense, and growing, diversity of avian H5N1 often over the years, including just last week in WER: Development Of Candidate Vaccine Viruses For Pandemic Preparedness, where we saw two new H5 virus candidates (both H5N1 & H5N8) proposed by the World Health Organization.


The continual evolution of HPAI H5 viruses over the past dozen years has resulted in more than 2 dozen different candidate vaccines to either be developed or proposed in order to keep up with the newly emerging clades and subclades of the virus.

Earlier today, in Eurosurveillance: Emergence Of A Novel Cluster of H5N1 Clade 2.2.1.2, we looked a recently formed branch in H5N1’s family tree that is spreading rapidly across Egypt.

Simply put, there are a number of subclades of H5N1 that circulate around the globe, and there can be considerable variability in each strain’s ability to infect, and kill (see Differences In Virulence Between Closely Related H5N1 Strains).

You can get a sense of how H5N1 has expanded from one clade in 1996, to more than 20 clades and subclades today, by the chart below (note: not all continue to circulate). 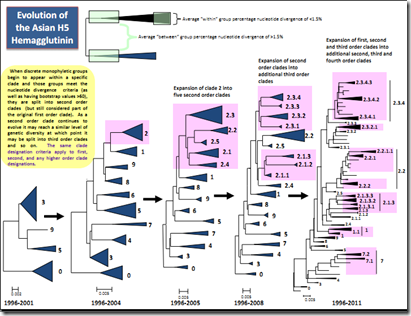 
By identifying and charting these variations on an avian H5 theme, you can often track down where a specific clade originated, where it has traveled, and get some sense of its `biological fitness’ - its ability to compete with other strains of the virus.


All of which serves as prelude to a new report, appearing in the EID Journal, that examines the H5N1 virus which has turned up again in Nigeria after an absence of 7 years, and finds that the recently arrived clade appears to have originated in China.

Specifically clade 2.3.2.1c, which was also isolated from a Nurse who returned to Alberta, Canada from a trip to China (see Alberta Canada Reports Fatal (Imported) H5N1 Infection), and has also been reported in Vietnam, India, Bulgaria, and Indonesia over the past several years.

How clade 2.3.2.1c managed to hopscotch thousands of kilometers and show up in Nigerian poultry last December remains an epidemiological mystery.

To the Editor: In Nigeria, from February 2006 through July 2008, outbreaks of highly pathogenic avian influenza (HPAI) subtype H5N1 virus infection in poultry negatively affected animal and public health as well as the agricultural sector and trade. These outbreaks were caused by viruses belonging to genetic clades 2.2 and 2.2.1 (1). In January 2015, seven years after disappearance of the virus, clinical signs of HPAI (swollen head and wattles, hemorrhagic shank and feet) and increased mortality rates were observed among backyard poultry in Kano and in a live bird market in Lagos State, Nigeria. The virus was isolated from 2 samples independently collected from the poultry farm (parenchymatous tissues) and the market (tracheal swab), and H5 subtype virus was identified by reverse transcription PCR. The samples were adsorbed onto 2 Flinders Technology Associates cards (GE Healthcare Life Sciences, Little Chalfont, UK), which were sent to the World Organisation for Animal Health/Food and Agriculture Organization of the United Nations Reference Laboratory for Avian Influenza in Italy for subtype confirmation and genetic characterization. Influenza A(H5N1) virus was detected in both samples, and sequencing of the hemagglutinin (HA) gene showed that the viruses possessed the molecular markers for HPAI viruses with a multibasic amino acid cleavage site motif (PQRERRRKR*G).

The results obtained from whole-genome analysis provide evidence that a novel clade of the A(H5N1) virus, specifically clade 2.3.2.1c, has reached Nigeria. Although ascertaining how and exactly when this has happened is difficult, it seems most likely that the virus entered the country in December 2014, as evidenced by unverified accounts of increased poultry deaths in some live bird markets in Lagos, after the birds had been moved from the north (Kano) to the south during the festive season. The identification of genetic clustering between the strains from Nigeria analyzed here and the HPAI A(H5N1) viruses originally identified in Asia suggests an unknown epidemiologic link between these regions, probably associated with human activities, migratory bird movements, or both.

Considering that this virus is an intersubtype reassortant and has already caused infection in humans, we believe that complete characterization of the strain in terms of virulence and host range is of high priority. Furthermore, because the reemergence of subtype H5N1 virus was followed by epidemiologic amplification (≈265 outbreaks in 18 states as of February 2015; T. Joannis, pers. comm., 2015) for which virus genetic characterization is not yet available, local veterinary and public health services and international organizations should take necessary measures to identify critical control points and stop circulation of this virus.

Posted by Michael Coston at 2:16 PM