Maryn McKenna’s TED Talk - What do we do when antibiotics don’t work any more?

Most of my readers are familiar with author, journalist, and blogger Maryn McKenna who now pens the Germination Blog for National Geographic, among her other endeavors. Maryn is also the author of two award winning books, Superbug: The Fatal Menace of MRSA   and Beating Back The Devil  and is working on a third.

Last March Maryn was invited to give a TED Talk on a topic she is well familiar with; the perils of growing antibiotic resistance.

While many of these extraordinary talks are filmed over several days, they are released a few at a time in the months that follow.  Today Maryn’s talk was posted, and so without further ado, I’ll simply step aside and invite you to watch Maryn’s 16 minute TED Talk at the link below.

WHAT TO DO WHEN ANTIBIOTICS DON’T WORK ANYMORE?

Penicillin changed everything. Infections that had previously killed were suddenly quickly curable. Yet as Maryn McKenna shares in this sobering talk, we've squandered the advantages afforded us by that and later antibiotics. Drug-resistant bacteria mean we're entering a post-antibiotic world — and it won't be pretty. There are, however, things we can do ... if we start right now. 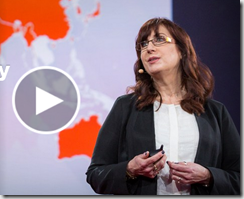