Our Global Game Of Whac-A-MERS 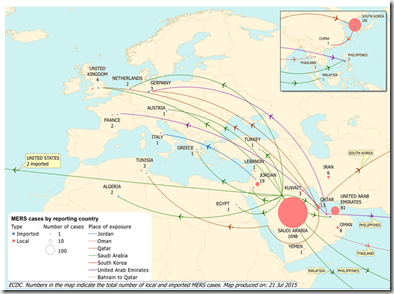 Crof has a report indicating that both  UK: Manchester patients test negative for MERS

Although they have not been confirmed positive yet, earlier today the UK’s NHS announced that two suspected MERS cases had shown up at the Manchester Royal Infirmary A&E, and for the past several hours that department has been closed to the public.

While test results are still pending, and both cases have been placed in isolation, the hospital now reports their A&E is now open.

Both patients were isolated for on-going management of their condition while tests took place. One patient has now been relocated to North Manchester General. Results of the tests are still pending.

Manchester Royal Infirmary A&E is open to the public. We would like to reassure our patients and the general public that there is no significant risk to public health.

Whether either one of these two cases end up being confirmed as having the MERS coronavirus (and we should know in the next 12 to 24 hours – updated  UK: Manchester patients test negative for MERS), this is a not-so-subtle reminder that someone with an exotic infectious disease - like MERS, avian flu, Ebola, or Lassa fever – can show up at the door to the emergency department of any hospital in the world.

While infection control disasters – like what we saw with MERS in South Korea – are always possible, the good news is we’ve seen most of these types of imported cases quickly contained.

Based on their  models, however, they calculated the odds of seeing at least 8 cases as the result of a single importation at a non-trivial 10.9%.

Making their interdiction even more difficult, the long incubation period (up to 14 days) and common early symptoms makes detection of infected passengers at the airport a long-shot (see Why Airport Screening Can’t Stop MERS, Ebola or Avian Flu).

In June the CDC released updated guidelines for healthcare providers (see CDC Releases HAN #380 On MERS) and held a COCA Call (see Updated Information & Guidelines For Evaluation Of MERS) to help bring clinicians up to speed on this potential threat. If you haven’t had a chance to listen, you can hear the audio and read the transcript at the link below:

Updated Information and Guidelines for Evaluation for MERS

On May 20, 2015, the Republic of Korea (Korea) reported to the World Health Organization an initial case of laboratory-confirmed MERS-CoV infection, the first case in what is now the largest single outbreak of MERS-CoV outside of the Arabian Peninsula. During today’s call, clinicians will be provided information about the global situation and the current status of the MERS-CoV outbreak in the Republic of Korea, updated guidance to healthcare providers and state and local health departments regarding who should be evaluated and tested for MERS-CoV infection, and further guidance on “Interim Infection Prevention and Control Recommendations for Hospitalized Patients with Possible MERS-CoV.”

Around the same time APHA (American Public Health Association)  weighed in with a summary report (see below) on the CDC's MERS guidelines, along with a handy poster for the public on how they should deal with the MERS threat (much of which would be applicable for almost any infectious disease). 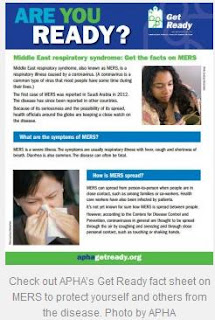 Just over a month ago, in TFAH Issue Brief: Preparing The United States For MERS-CoV & Other Emerging Infections, we looked at the commitments that governments, healthcare facilities, and public health departments around the world need to take in order to prepare for the arrival of MERS and other Emerging infections.

Another complicating factor, in recent weeks we’ve looked at a pair of studies  that call into question both the quality of some PPEs (Personal Protective Equipment) used by Health Care Workers, and their techniques in donning and doffing them safely.

Whether MERS,  Ebola, or Avian flu ever develop into a full fledged global health threat is unknown. At some point, the odds are something will. But for now, we can be grateful that most of the suspected cases will be false alarms and will provide opportunities for HCWs to improve their infection control skills.

The best case scenario is we learn to play this global game of Whac-a-MERS (or Ebola, or H5N1, etc.) exceedingly well, and whenever one of these imported cases pops up, we contain it before it can spread.

But for that to work, every healthcare facility – large and small - needs to plan, train and equip themselves for the possibility that the next patient that comes through the ER entrance could be carrying something considerably more exotic than the flu.

Posted by Michael Coston at 2:47 PM