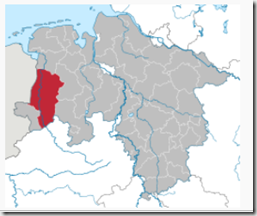 Roughly three weeks after the UK reported an outbreak of HPAI H7N7 (see Defra: Lancashire Avian Flu Confirmed As HPAI H7N7), today we learn from the Lower Saxony Ministry of Agriculture of a similar outbreak involving 10,000 layer hens at a farm in Emsland.

While it has been HPAI H5 avian flu viruses that have captured the bulk of our attention over the past dozen years, in the `also ran’ category are a growing variety of both low and high path H7 viruses.  Until the emergence of H7N9 in China in 2013 – and the resultant infections (and in some cases, deaths) of hundreds of people – H7 viruses as a group were considered a low threat to public health.

China’s emerging  H7N9 virus is a reminder that one should not get too comfortable with the track record of any flu subtype, as past performance is no guarantee of future results.

For now, however, H7 viruses other than China’s H7N9 are considered to pose a low threat to human health, as nearly all reported infections have been mild – often producing little more than conjunctivitis (see ECDC Update & Assessment: Human Infection By Avian H7N7 In Italy).

H7’s , however, are considered a serious threat to the poultry industry, and have caused hundred of millions of dollars in losses over the years.

Investigations in LAVES and FLI confirm the self-check-result

HANNOVER. In Emsland the highly pathogenic form of bird flu has been found in a herd of hens. Affected is a company with about 10,000 laying hens in floor management that have been humanely killed. Suspected bird flu had resulted from self-monitoring results, which have now been confirmed by official samples of LAVES. In addition, it is clear, according to studies in the national reference laboratory of the Friedrich-Loeffler-Institute (FLI) on the island Riems, that it was the highly pathogenic form of avian influenza (HPAI) is with subtype H7N7.

Experience has shown that it appears to come from animals to humans only in close contact with diseased or dead birds and their products or excretions of transmitting viruses. One should avoid direct contact with infected animals so sure. All necessary measures to combat the disease are set by European and federal regulations by the Emsland district Based on the official result. At the outbreak of highly pathogenic influenza form they relate, inter alia, the establishment of a Sperrbezirkes with three kilometers radius around the outbreak and operation of a monitoring area with a radius of ten kilometers. Poultry shall not be moved from these areas out in these areas or screwing in. Within a radius of one kilometer around the affected operating stocks are also animal welfare compliant killed - in this case about 60 animals from two animal facilities.

In addition, epidemiological investigation be undertaken to determine the cause and other contact holdings. Shall take effect 30 days after cleansing and disinfection operation no new case, these measures can be lifted. In Lower Saxony, outbreaks of highly pathogenic avian influenza type H5N8 December 2014 were observed in the district of Cloppenburg and in the Emsland district recently. In March and in June this year, there was in the district of Cuxhaven and in the Emsland district outbreaks of low pathogenic form of avian influenza type H7N7.

For years, it comes again and again to the world outbreaks. With nearly 50 million so far this year were affected animals in particular the United States affected by severe HPAI cases. HPAI caused by avian influenza viruses, of which there are a variety of subtypes. An entry in domestic poultry is usually indirectly via virus-contaminated people and vehicles or excretions. In stock transfer is usually directly from animal to animal.

In Germany, regular monitoring tests for avian influenza in poultry flocks and in wild birds will be held. These have so far found no evidence of an influenza occurrence in Lower Saxony. Moreover, there is in poultry flocks special control inspections. All poultry farmers are urged to check their bio-security measures and apply them consistently. More information is available at www.tierseucheninfo.niedersachsen.de be viewed.

Posted by Michael Coston at 7:21 AM