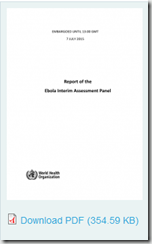 The World Health Organization has operated for years with limited resources, no shortage of public health crises, and often less than full cooperation from member states. Largely successful, last year they badly (and quite publically) floundered when West Africa’s Ebola epidemic grew faster, and spread farther, than any Ebola outbreak on record.

Today we’ve the release of a 29 page PDF  Report of the Ebola Interim Assessment Panel, which while highly critical of the WHO’s structure and response, lays a good deal of the blame on a lack of international financial support, and insufficient cooperation, by their member nations.

First an excerpt from the Executive summary (you’ll want to read the whole thing), after which I’ll return with a bit more.

The Panel believes that this is a defining moment for the health of the global community. WHO must re-establish its pre-eminence as the guardian of global public health; this will require significant changes throughout WHO with the understanding that this includes both the Secretariat and the Member States. At each of its three levels, the Secretariat must undergo significant transformation in order to better perform its core function of protecting global health. For their part, Member States must provide, at their highest political  levels, the required political and financial support to their Organization. While WHO has already accepted the need for transformation of its organizational culture and delivery, it will need to be held accountable to ensure that this transformation is achieved.

The Ebola crisis not only exposed organizational failings in the functioning of WHO, but it also demonstrated shortcomings in the International Health Regulations (2005). If the world is to successfully manage the health threats, especially infectious diseases that can affect us all, then the Regulations need to be strengthened. We ask that the full Review Committee under the International Health Regulations (2005) to examine the role of  the Regulations in the Ebola outbreak (the IHR Review Committee for Ebola), which follows our Panel, consider and take forward the implementation of our recommendations. Had the recommendations for revision made in 2011 by the Review Committee in relation to Pandemic (H1N1) 2009 been implemented,1 the global community would have been in a far better position to face the Ebola crisis. The world simply cannot afford another period of inaction until the next health crisis.

Our report and recommendations fall under the following three headings: the International Health Regulations (2005); WHO’s health emergency response capacity; and WHO’s role and cooperation with the wider health and humanitarian systems.

Although there is more than enough blame to go around, one of the key factors cited by this panel report is the lack of seriousness by which the global community has treated the 2005 IHR regulations that – among other things - requires countries to develop mandated surveillance and testing systems, and to report certain disease outbreaks and public health events to WHO.

Although the agreement went into force in 2007, member states had until mid- 2012 to meet core surveillance and response requirements. Most nations failed to meet that deadline, and an extension – not to exceed two years – was granted.

That extension expired last summer, but by February of 2014 the writing was already on the wall, and another 2 year extension was authorized (see WHO: IHR & Global Health Security) pushing the deadline  for final implementation of the IHR to at least 2016.

A couple of months ago the WHO tweeted:

The expectation is that at least one more 2-year extension is in the offing, as only 1/3rd of member nations have met the minimum core requirements.

Complicating matters, there often seem to be economic, social, and political impediments to the timely and accurate reporting of disease outbreaks in many countries, regardless of their readiness under the IHR.

Although the panel put forth more than 20 specific recommendations, the first 6 deal with strengthening the IHR.

The Panel recommends as follows.

1. WHO should propose a prioritized and costed plan, based on independently assessed information, to develop core capacities required under the International Health Regulations (2005) for all countries. The financing of this plan is to be done in close partnership with the World Bank.

2. All levels of WHO should be strengthened in order to increase the Organization’s ability to independently identify health risks and to declare health emergencies.

3. The IHR Review Committee for Ebola should consider incentives for encouraging countries to notify public health risks to WHO. These might include innovative financing mechanisms such as insurance triggered to mitigate adverse economic effects.

4. The IHR Review Committee for Ebola should consider disincentives to discourage countries from taking measures that interfere with traffic and trade beyond those recommended by WHO.

5. The IHR Review Committee for Ebola should consider the possibility of an intermediate level that would alert and engage the wider international community at an earlier stage of a health crisis. At present it is possible only to declare a full Public Health Emergency of International Concern (PHEIC).

6. The United Nations Secretary-General’s High-Level Panel on the Global Response to Health Crises  should put global health issues at the centre of the global security agenda. In particular, it should identify procedures to take specific health matters to the United Nations Security Council and consider incentives and disincentives needed to improve global health security.

It is sobering, but not exactly surprising, to note that we live in a world where one needs to  `consider incentives for encouraging countries to notify public health risks to WHO’, when that is part and parcel of the IHR law, should be of benefit to all, and generally comes under the heading of `doing the right thing’.

At 9am EDT, the WHO emailed out the following statement to journalists on this interim report:

Statement: WHO response to the Ebola Interim Assessment Panel Report

The World Health Organization (WHO) welcomes the report from the Ebola Interim Assessment Panel and thanks the hard-working members for their rapid review, analysis and recommendations.

The panel members divided their review and recommendations into three areas:  the International Health Regulations, WHO’s health emergency response capacity and WHO’s role and cooperation with the wider health and humanitarian systems.

In August, the Director-General will convene a Review Committee of the International Health Regulations, where Member States can discuss the recommendations of the panel, including the idea of establishing an intermediate level of alert to sound an alarm earlier than a full Public Health Emergency of International Concern.

The panel reiterated the need for a unified programme for health emergencies as committed to by the Director-General at the World Health Assembly to unite resources for emergencies across the three levels of the Organization.

WHO is already moving forward on some of the panel’s recommendations including the development of the global health emergency workforce and the contingency fund to ensure the necessary resources are available to mount an initial response.

The current Ebola outbreak is still ongoing and improved methods of working are incorporated into the response as they are developed. But it will take many more months of continued hard work to end the outbreak and to prevent it from spreading to other countries. WHO is grateful for the commitment from all partners; it is essential to get to zero cases and to put in place the systems to stay there.

Posted by Michael Coston at 9:14 AM