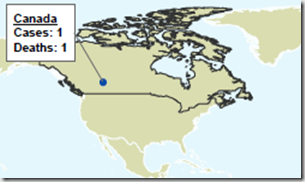 We’ve a case study appearing in the July/August 2015 (Volume 26 Issue 4: 221-223) edition of the Canadian Journal of Infectious Diseases & Medical Microbiology that provides the most detailed look to date at North America’s only imported H5N1 infection – that of a Canadian nurse who was hospitalized upon her return from China in late 2013 (see CDC Statement On 1st H5N1 Case In North America).

While this was the first imported HPAI avian flu patient to arrive in North America, the following winter we would see two cases of H7N9 arrive in Vancouver (see H7N9 Confirmed In 2nd B.C. Patient) – also from China - underscoring the fact that emerging viruses like bird flu are more than just a local problem.

As we discussed back in January of 2014 (see Atypical Influenza (H5N1,H7N9, pH1N1) Presentations, the Alberta case was notable for several reasons.

While we’ve seen hints of neurological involvement with H5N1 in the past, this case is the first we’ve seen with MRI imaging of the brain and extensive histological analysis. I’ve provided the abstract below, but a link to download the full PDF file (including medical imaging) can also be found at the link below.

In an urban centre in Alberta, an otherwise healthy 28-year-old woman presented to hospital with pleuritic chest and abdominal pain after returning from Beijing, China. After several days, this was followed by headache, confusion and, ultimately, respiratory failure, coma and death.

Microbiology yielded influenza A subtype H5N1 from various body sites and neuroimaging was consistent with meningoencephalitis. While H5N1 infections in humans have been reported in Asia since 1997, this is the first documented case of H5N1 influenza in the Western Hemisphere.

The present case demonstrated the typical manifestation of H5N1 influenza but, for the first time, also confirmed previous suggestions from human and animal studies that H5N1 is neurotropic and can manifest with neurological symptoms and meningoencephalitis.

Although you’ll want to read the entire report, the authors write:

These reports suggest the H5N1 virus is becoming more neurologically virulent and adapting to mammals. Despite the trend in virulence, the mode of influenza virus transmission remains elusive to date.  It is unclear how our patient acquired the H5N1 influenza virus because she did not have any known contact with animals or poultry.

While impressively documented, this isn’t the first evidence that H5N1 – and other novel flu viruses – can cause significant neurological symptoms in some patients, or present in a manner making prompt and proper diagnosis difficult.

One of the earliest indications came from this study involving the deaths of a brother and sister in Vietnam in 2004.

Fatal avian influenza A (H5N1) in a child presenting with diarrhea followed by coma.

In southern Vietnam, a four-year-old boy presented with severe diarrhea, followed by seizures, coma, and death. The cerebrospinal fluid contained 1 white cell per cubic millimeter, normal glucose levels, and increased levels of protein (0.81 g per liter). The diagnosis of avian influenza A (H5N1) was established by isolation of the virus from cerebrospinal fluid, fecal, throat, and serum specimens. The patient's nine-year-old sister had died from a similar syndrome two weeks earlier. In both siblings, the clinical diagnosis was acute encephalitis. Neither patient had respiratory symptoms at presentation. These cases suggest that the spectrum of influenza H5N1 is wider than previously thought.

In June of 2007, we saw a report (see Atypical Presentations of H5N1) out of Indonesia, of a 3-year old child infected with H5N1 but that presented with fever, but without respiratory symptoms.   Atypical since fever, cough, and in most cases pneumonia, are pretty much a hallmark the H5N1 virus.

Gastrointestinal symptoms have been reported in a  number of H5N1 cases as well, as we saw in 2008  in this large review of Chinese bird flu patients (see Clinical Case Review Of 26 Chinese H5N1 Patients).

In 2009, in Study: H5N1 Infection And Brain Damage, we looked at a story by Maggie Fox – who was then writing for Reuters – on a PNAS study that found the H5N1 virus was neurotropic (able to infect & damage nerve cells) . . . at least in mice.

Tests on mice infected with H5N1 virus show lasting damage to nerve cells, including the brain

Survivors of bird flu, and perhaps other influenza viruses, may not be out of the woods once the fever and cough are gone: Animal studies suggest the virus may damage the brain and cause Alzheimer's and Parkinson's disease.

The tests on mice show that the H5N1 virus can get into the brain, causing damage that resembles Parkinson's and Alzheimer's in humans, the researchers wrote in the Proceedings of the National Academy of Sciences.

This PNAS study (link below) found that the H5N1 virus was highly neurotropic in lab mice, and in the words of the authors `could initiate CNS disorders of protein aggregation including Parkinson's and Alzheimer's diseases’.

A month ago, in Novel H5N1 Reassortment Detected In Migratory Birds – China, we looked at the emergence and spread of clade 2.3.2.1c and made special note of this its apparent neurotropic qualities.

From the Scientific Reports open access study on the genetics of the H5N1 clade 2.3.2.1c virus - Highly Pathogenic Avian Influenza A(H5N1) Virus Struck Migratory Birds in China in 2015 – this excerpt from its Abstract.

Sanmenxia Clade 2.3.2.1c-like H5N1 viruses possess the closest genetic identity to A/Alberta/01/2014 (H5N1), which recently caused a fatal respiratory infection in Canada with signs of meningoencephalitis, a highly unusual symptom with influenza infections in humans. Furthermore, this virus was shown to be highly pathogenic to both birds and mammals, and demonstrate tropism for the nervous system.

And the following excerpts come from the discussion section of the report.

The novel isolates were found to be highly pathogenic to chickens and mice, and virus isolated from mouse brains after challenge. It should be noted that meningoencephalitis was also observed in the fatal human case with Alberta2014, an unusual outcome for infections with H5N1 HPAIV in humans20.

Neurological symptoms were also noted in the non-surviving tiger infected with Tiger2013, with the heart, liver, spleen, lung, kidney, aquae pericardii, and cerebrospinal fluid all positive for H5N1 virus as detected by real-time RT-PCR21.

For now, the good news is that H5N1 remains primarily a disease of birds, and does not transmit easily from one human to the next.  Unless and until something changes that, it will remain a threat primarily to those who have direct contact with infected birds in countries where the virus is endemic.

While we have no way of knowing where H5N1’s evolutionary path will lead it – or how much of a threat it will ever pose to global public health – its rapidly growing diversity and recent geographic spread puts it very high on our list of viruses to watch.

For more on neurological manifestations and influenza, you may wish to revisit: