HPAI H5: Catch As Cats Can 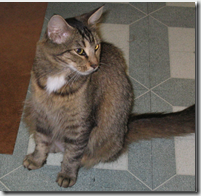 With the expected return of HPAI H5 avian flu in wild and migratory birds this fall and winter there are understandably some concerns about the risks that may pose to both humans, and to their companion animals.

So far, the strains of HPAI detected in North America have not been linked to human disease - and so the risks to human health are currently considered low.

But the H5N8 parental virus has been identified in Korean dogs (see H5N8 Antibodies Detected In South Korean Dogs (Again)), and other HPAI H5 viruses have a long history of infecting dogs, cats, and many other small mammals (see USGS List of Species Affected by H5N1 (Avian Influenza).

Recently a neighbor (with outdoor cats) asked me about the risks, and the Sacramento Bee is carrying an veterinarian’s advice column this weekend on How do cats catch bird flu?, so today a review of what we know about companion animals and their susceptibility to avian flu seems in order.

First though, the risk to indoor cats and dogs is probably nil, and unless we are besieged by unprecedented numbers of infected birds (out of thousands of birds tested last year, fewer than 100 were positive), the odds than your outdoor dog or cat will encounter an infected bird are probably pretty low.

And unlike the H5N1 virus, which has been linked to occasional canine and feline deaths across Asia and the Middle East over the past decade, the H5N2 and H5N8 subtypes reported in North America last year have not been linked to animal illness or deaths.

That said, the viruses in circulation, or their behavior, can change over time. Sometimes abruptly, as happened in 2004.

Up until then, dogs and cats were thought pretty much immune to flu.  In 2004,  Equine H3N8 – an influenza that had been bouncing around in horses since the 1960s – jumped to Greyhounds at a racetrack in Miami, and soon canine influenza was off to the races as well (see EID Journal article Influenza A Virus (H3N8) in Dogs with Respiratory Disease, Florida).

At roughly the same time, half a world away, avian H5N1 was making big inroads across Southeast Asia, and zoos that kept large cats found to their dismay what happens when you feed infected chicken carcasses to tigers and leopards. The following comes from a World Health Organization GAR report from 2006.

In 2006, virologist C. A. Nidom of the Institute of Tropical Disease, Airlangga University demonstrated that of 500 cats he tested in and around Jakarta, 20% had antibodies for the H5N1 bird flu virus.  Findings that prompted the FAO in 2007 to warn that: Avian influenza in cats should be closely monitored.

More recently, in 2012 the OIE reported on Cats Infected With H5N1 in Israel, while earlier this year we saw Guangxi Zoo Reports 2 Tiger Deaths Due To H5N1.   Just last June we saw reports of Fatal H5N6 Avian Influenza Virus Infection in a Domestic Cat and Wild Birds in China.

Dogs have been less often found infected by HPAI H5 (Korean H5N8 being an exception), and a study from last year may hold some clues as to why.  Dogs, according to this report, are less likely to be sickened by H5N1 than cats.

Greater virulence of highly pathogenic H5N1 influenza virus in cats than in dogs.

Highly pathogenic H5N1 influenza virus continues to infect animals and humans. We compared the infectivity and pathogenesis of H5N1 virus in domestic cats and dogs to find out which animal is more susceptible to H5N1 influenza virus. When cats and dogs were infected with the H5N1 virus, cats suffered from severe outcomes including death, whereas dogs did not show any mortality.

Viruses were shed in the nose and rectum of cats and in the nose of dogs. Viruses were detected in brain, lung, kidney, intestine, liver, and serum in the infected cats, but only in the lung in the infected dogs. Genes encoding inflammatory cytokines and chemokines, Toll-like receptors, and apoptotic factors were more highly expressed in the lungs of cats than in those of dogs.

Our results suggest that the intensive monitoring of dogs is necessary to prevent human infection by H5N1 influenza virus, since infected dogs may not show clear clinical signs, in contrast to infected cats

Other studies have shown significant morbidity and mortality in dogs infected with H5N1, so the specific strain, loading dose, and perhaps even the health and  breed of dog may affect the outcome (see Dogs are highly susceptible to H5N1 avian influenza virus & Fatal Avian Influenza A H5N1 in a Dog).

The bottom line is that there’s no doubt that companion animals (dogs & cats) can be infected with some subtypes and strains of HPAI H5, if exposed.

The big questions (unanswered for now) are whether any of the North American HPAI H5 strains we see this winter are going to be pathogenic to anything beyond avian species, and what level of exposure risk migrating and wild birds will pose this fall and winter.

For now, those risks appear pretty small - but greater than zero - with feral cat colonies probably at greatest risk

The AVMA offers a good deal of advice to pet owners in the following FAQ.  I’ve only excerpted a small section, so follow the link to read the entire document which covers dogs, cats, birds, and even pot-bellied pigs.

Q: What is the current risk that a cat will become infected with highly pathogenic avian influenza in the United States?

A: Although highly pathogenic avian influenza (HPAI) has circulated in Asia, Africa, and Europe, they differ from strains that have been identified in the United States. The risk of a cat contracting the disease in this country is still currently considered very low.

Helpful precautionary measures include keeping domestic cats indoors to prevent exposure to potentially infected birds when HPAI is detected in the area, avoiding contact with wild birds and other animals outside the home that could potentially be infected, and avoiding feeding poultry or other bird products that may be infected with HPAI to cats. Owners of ill cats, particularly those known or suspected to have been exposed to sick or dead birds, are encouraged to have their cats examined by a veterinarian.

A: Contact your veterinarian for assistance. The international Food and Agriculture Organization has indicated that transmission of avian influenza to a cat from a dead bird is extremely low. However, depending on the area where you live (and whether HPAI has been identified in that geographic region) as well as guidance developed by state and federal authorities, he or she may recommend that you confine the cat indoors in a separate room or cage away from humans and other animals for 7 to 10 days and avoid being scratched or bitten. If the cat remains healthy throughout this time, your cat probably poses a minimal risk of infection to other animals and people.

If your cat develops signs of disease consistent with AI infection, your veterinarian should be notified immediately and the cat should continue to be confined to minimize its contact with people and other animals. Wear disposable gloves and disinfect all surfaces the cat may have contacted, including food and water dishes and litter boxes. Wash your hands thoroughly after disinfecting surfaces and equipment and after handling potentially exposed cats.

Posted by Michael Coston at 7:38 AM