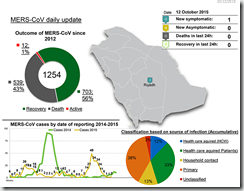 After an 8-day lull in reporting cases, Riyadh is reporting its 3rd case in three days, all occurring among relatively young (mid-20s) expat females.  None are listed as HCWs.

The first two’s exposures are still listed as `under review’, but today’s is listed as a `household contact’.  All cases have been listed in `stable condition’.

Prior to this cluster, the last Saudi MERS case was on October 1st, that of a 38-year old expat male.  It is unknown whether these latest cases are connected to that case, but we do have a WHO update with what is known about his illness  (which isn’t much).

Between 27 September and 1 October 2015, the National IHR Focal Point for the Kingdom of Saudi Arabia notified WHO of 1 additional case of Middle East respiratory syndrome coronavirus (MERS-CoV) infection.

A 38-year-old, non-national male from Riyadh city developed symptoms on 21 September and, on 28 September, was admitted to hospital. The patient, who has no comorbidities, tested positive for MERS-CoV on 30 September. Currently, he is in stable condition in a negative pressure isolation room on a ward. Investigation of history of exposure to the known risk factors in the 14 days prior to the onset of symptoms is ongoing. Contact tracing of household and healthcare contacts is ongoing. 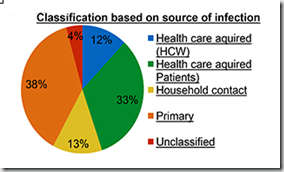 Although nearly half (45%) of all known MERS cases are acquired through hospital or healthcare exposure, nearly as many (42%) are either primary (community acquired) or unclassified.

Some of these primary cases are probably the result of camel exposure, but likely that only makes up a small percentage.

Most of these primary cases have no known exposure history – like the 38 year-old cited above – which has led to speculation that some degree of mild or asymptomatic transmission may be occurring in the community.

Unfortunately, three years after the virus was first detected and we’ve yet to see a well-mounted case control study come out of Saudi Arabia, so speculation is about all we have at the moment.

Posted by Michael Coston at 7:17 AM