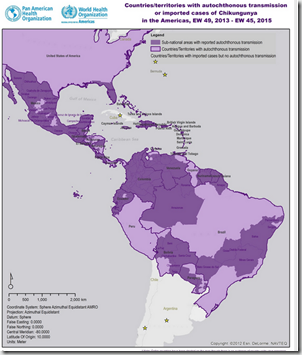 Chikungunya In The Americas – Credit PAHO

Considering that Chikungunya arrived in the Caribbean on the French part of St. Martins not quite two years ago, it has spread with remarkable speed and agility across the Caribbean, Central and South America.   Exact numbers are impossible to know, but well in excess of 1.5 million infections have been reported.

Until 2005, Chikungunya was an obscure mosquito-borne disease that only sporadically caused outbreaks in Eastern and central Africa.  Then, in an unexpected plot twist , a mutation in the envelope protein gene (E1-A226V) of the virus allowed Aedes Albopictus or `Asian tiger’ mosquito to transmit the virus more efficiently (see A Single Mutation in Chikungunya Virus Affects Vector Specificity and Epidemic Potential).

After decades of of having limited impact, CHKV began to tear across the Indian Ocean with a vengeance, first sparking an epidemic on Reunion Island where it reportedly infected about 1/3rd of that island’s population (266,000 case out of  pop.770,000) in a matter of a few months, before moving on to Southeast Asia.

Since then, it has spread across much of the tropics, with outbreaks in non-tropical countries like France, Italy, and Spain becoming more common.  Florida reported its first locally acquired case in the summer of 2014, but so far most of the US activity has involved imported cases.

Travelers to countries where the virus, and the mosquito vector, are common are at greatest risk, although they could also conceivably `bring the virus home’ with them, sparking an outbreak such as we saw in Northern Italy in 2007 (see It's A Smaller World After All).

With continued reports of the virus in Mexico and Central America, this week the CDC has updated their Travel Notices for Chikungunya in the Americas.

CDC recommends that travelers to Mexico protect themselves from chikungunya by preventing mosquito bites. Some travelers may be more likely to get chikungunya, have severe disease, or be at higher risk for other reasons. CDC advises travelers in high-risk groups to discuss their travel plans with their health care provider. These groups include the following:

People who have arthritis

Women who are late in their pregnancies, because of the risk to babies born at the time their mother is sick

People who might have difficulty avoiding mosquito bites, such as those planning to spend a lot of time outdoors or staying in rooms without window screens or air conditioning.

If you feel sick and think you may have chikungunya:

Talk to your doctor or nurse if you feel seriously ill, especially if you have a fever.

Use acetaminophen or paracetamol to treat fever and pain.

Get lots of rest, and drink plenty of liquids.

In June 2014, El Salvador reported locally transmitted cases for the first time in Central America. Local transmission means that mosquitoes in the area have been infected with chikungunya and are spreading it to people.

CDC recommends that travelers to the Central America protect themselves from mosquito bites. Some travelers may be more likely to get chikungunya, have severe disease, or be at higher risk for other reasons. CDC advises travelers in high-risk groups to discuss their travel plans with their health care provider.

Chikungunya joins Dengue, West Nile Virus, and the recently arrived Zika Virus as serious mosquito borne illness threats in the Americas.  While WNV is widely reported across the United States, Dengue and Zika have yet to make serious inroads (although imported cases occur frequently).

The concern is, that could change, as the mosquito vectors (Aedes Aegypti & Aedes Albopictus) needed to transmit these viruses are quite common across much of the southern and eastern United States. 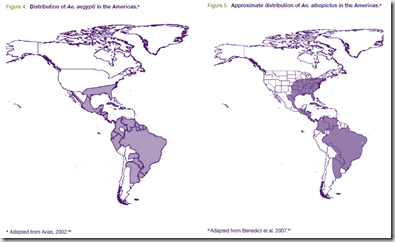 While it may take repeated introductions of viremic travelers, the right timing, and some bad luck - the potential for seeing Chikungunya, Dengue or the Zika Virus get a foothold in the United States is real - and so reducing the number of travelers returning home with these viruses is a high priority.

Posted by Michael Coston at 9:31 AM