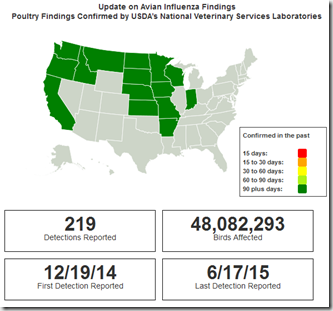 Those of us who have never have had to coordinate the culling, and disposal, of several million infected chickens (or turkeys) probably have little idea of the the sheer enormity of the logistics involved.  Adding to the pressure, the longer any outbreak goes unresolved, the greater the chances are the virus will spread to a neighboring farm.

While experience has shown that nothing is ever 100% certain when it comes to when and where avian flu will appear, the expectation is we’ll see a return of the HPAI H5 virus again this winter in migratory birds, with outbreak in poultry operations a likely result.

Over the summer we’ve seen a steady push by the USDA/APHIS to prepare for the return of bird flu, including a call for better biosecurity in both backyard flocks and commercial poultry operations.  As with almost every disease or disaster, prevention is always the preferable solution.   A few blogs include:

APHIS: What To Expect If You Suspect

But the USDA has to be prepared to deal with scores – perhaps even hundreds – of outbreaks over the next six months.  Outbreaks that could occur anywhere in the nation, and that could involve far more birds than we saw last year.   This week they released a 7-page PDF document listing their response goals.

Among the more ambitious goals cited:

Rather than try to excerpt large portions, I would simply suggest you download and read the full document.