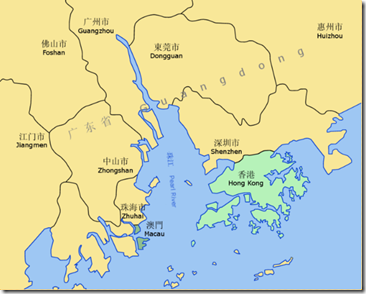 Last week we saw a preliminary report of a Hong Kong: Magpie Robin Testing Positive For HPAI H5, but we’ve been awaiting more definitive tests.  The find isn’t all that unusual, as most winters Hong Kong reports a handful of such case as migratory birds pass through or local birds stray in from the mainland.

H5N6 is a recently emerged reassortant of the H5N1 virus that first appeared in China and Laos in the spring of 2014, only a couple of months after the emergence of another HPAI virus – H5N8 – in South Korea.

Since then H5N6 has spread  across a wide swath of China, and has turned up sporadically in Vietnam and Laos (see  H5N6: The Other HPAI H5 Threat).   Unlike H5N8 – which now threatens Europe and North America - H5N6 has shown a limited ability to infect (sometimes fatally) humans. 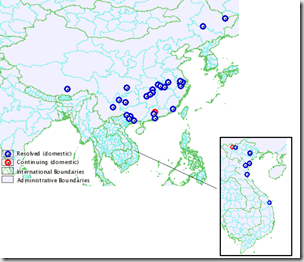 Today the results are in, and for the third time in a little over 6 months, the culprit in H5N6.    While not a huge surprise, this is an indication of just how pervasive this upstart virus has become in wild and migratory birds in eastern China.

The Agriculture, Fisheries and Conservation Department (AFCD) said today (November 23) that the carcass of an oriental magpie robin found in Kwai Chung was confirmed to be H5N6 positive after a series of laboratory tests.

The dead bird was found and collected on the second floor staircase of Wing Yiu House, Lai Yiu Estate, Kwai Chung, on November 17.

The AFCD will continue to conduct inspections of poultry farms to ensure that proper precautions against avian influenza have been implemented.

The spokesman reminded people to observe good personal hygiene. "They should avoid personal contact with wild birds or live poultry and clean their hands thoroughly after coming into contact with them," he said.

While H5N6 is currently only a threat to China and Southeast Asia, the same could have been said about H5N1 and H5N8 in the past.  They’ve winged their way from Asia to Europe, Africa and North America on the backs of migratory birds, and the concern is the same could happen with H5N6 or H7N9.

For additional background, you may wish to revisit FAO-EMPRES Report On The Emergence And Threat Of H5N6

Posted by Michael Coston at 6:45 AM