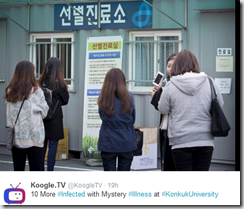 With no new pneumonia cases reported in more than a week, and all but one of the previously announced 55 cases now released from the hospital, the Korean CDC has gone from issuing daily updates to posting far less frequent statements. Today’s marks the first since last Monday.

The one patient still hospitalized has tested positive for Tuberculosis, although it isn’t clear from the translation whether this was a primary or an incidental finding.

Despite repeated testing, no causative agent or pathogen has been identified as the cause of this outbreak, although some testing (particularly for environmental contaminants) is still ongoing. While cause of half of all community acquired pneumonia cases often goes unidentified, drawing a blank for a cluster as large as this is unusual.

Given the lack of secondary spread beyond occupants of Konkuk University’s Animal Life Sciences Building, a bacterial, fungal, or chemical exposure where they all worked remains high on their suspect list.

We’ll revisit this story if, and when, a cause is revealed.  In the meantime, here is the Korean CDC statement.

Centers for Disease Control (General Manager Yang byeongguk) is Konkuk University Animal Life Sciences had in the last 7 days with regard to respiratory diseases new report is (11.12 days 0 until total cumulative reported 84 cases), identified so far 55 suspected cases of 54 patients were discharged, one of whom tuberculosis has been further confirmed during the said treatment.

- Suspected: chest X-phase with 10.8 days of life since the founding of the University Animal Science College visited the building character and if you have fever over 37.5 ℃ suspected pneumonia findings

The conducted among laboratory workers in the same building power so far in the chest radiograph active TB patients were found to be no more,

- In particular, about the 13 people who worked closely with the laboratory as the patient is added to the ongoing blood tests for latent tuberculosis *, test results will confirm my week.

* Latent tuberculosis: is infected with Mycobacterium tuberculosis, but the current state is not endemic

Meanwhile, the Centers for Disease Control is continuing the current epidemiological and environmental investigation in connection with the founding of the University of respiratory diseases, specific details on the test results up to now are said pathogen-free conditions.

Posted by Michael Coston at 5:58 AM