WHO: Multi-Country Survey On Public Misconceptions Regarding Antibiotic Resistance 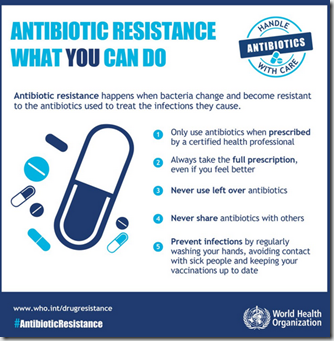 Today marks the start of the CDC’s Get Smart About Antibiotics Week,  while in many other places around the globe (Canada, Australia, the EU, etc.) all or part of this week is dedicated to antibiotic awareness. While the `next severe pandemic’ is always a topic of great interest, the slow-rolling, ongoing epidemic of antibiotic resistance is already well established, and claiming lives every day. 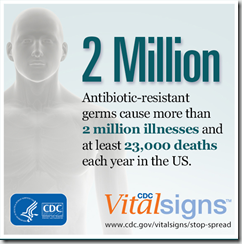 Some recent blogs on the topic include:

CDC’s Vital Signs: A Coordinated Approach To Curb The Spread Of Antibiotic Resistance

Maryn McKenna’s TED Talk - What do we do when antibiotics don’t work any more?

In early 2012 World Health Director-General Margaret Chan expressed a dire warning about our dwindling antibiotic arsenal (see Chan: World Faces A `Post-Antibiotic Era’) – a sentiment echoed a year later by CDC Director Thomas Frieden during the release of a major US report on the threat (see McKenna On CDC Antibiotic Resistance Report).

A dark, if not Inevitable future, but one we seem to be hurtling towards at breakneck speed.

The World Health Organization has released (early, after the embargo was broken) a report on a recent survey taken across 12 countries, involving 10,000 respondents, that shows a lot more public education is needed on the safe, and responsible use of antibiotics.

I’ve only included the opening paragraphs, so follow the link to read it in its entirety:

16 November 2015 ¦ GENEVA - As WHO ramps up its fight against antibiotic resistance, a new multi-country survey shows people are confused about this major threat to public health and do not understand how to prevent it from growing.

Antibiotic resistance happens when bacteria change and become resistant to the antibiotics used to treat the infections they cause. Over-use and misuse of antibiotics increase the development of resistant bacteria, and this survey points out some of the practices, gaps in understanding and misconceptions which contribute to this phenomenon.

Almost two thirds (64%) of some 10 000 people who were surveyed across 12 countries say they know antibiotic resistance is an issue that could affect them and their families, but how it affects them and what they can do to address it are not well understood. For example, 64% of respondents believe antibiotics can be used to treat colds and flu, despite the fact that antibiotics have no impact on viruses. Close to one third (32%) of people surveyed believe they should stop taking antibiotics when they feel better, rather than completing the prescribed course of treatment.

“The rise of antibiotic resistance is a global health crisis, and governments now recognize it as one of the greatest challenges for public health today. It is reaching dangerously high levels in all parts of the world,” says Dr Margaret Chan, WHO Director-General, in launching the survey findings today. “Antibiotic resistance is compromising our ability to treat infectious diseases and undermining many advances in medicine.”

The survey findings coincide with the launch of a new WHO campaign ‘Antibiotics: Handle with care’—a global initiative to improve understanding of the problem and change the way antibiotics are used.