MCR-1: The Return Of The Plasmids 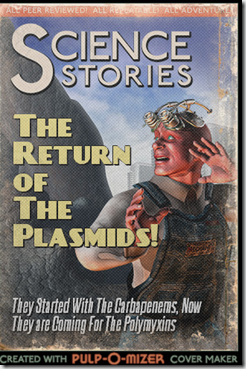 Although it may sound like a likely title for the next Star Wars installment, Plasmids are tiny snippets of DNA that can be easily transferred between different types of bacteria, and as we’ve seen with NDM-1 and other variants, they can convey antibiotic resistance to their new hosts.

The NDM-1 (New Delhi metallo-ß-lactamase-1) enzyme – which has received considerable attention these past five years – conveys resistance to the Carbapenem class of antibiotics, which are often used as the drug of last resort for treating difficult bacterial infections, including Escherichia coli (E. coli) and Klebsiella pneumoniae.

It may help if you think of plasmids as vehicles that can travel between different types of bacteria, and the resistance genes (like NDM-1) as one of its passengers.

Since it requires physical contact between two different types of bacteria for plasmids to transfer, man-made environments where many types of bacteria are thrown together -  such as sewage treatment plants and contaminated water supplies -  are of great interest to microbiologists studying plasmids.

It was just over 5 years ago the Professor Timothy Walsh et al. published their study Emergence of a new antibiotic resistance mechanism in India, Pakistan, and the UK: a molecular, biological, and epidemiological study  describing the NDM-1 enzyme, followed in the spring of 2011 with a report in the Lancet : NDM-1 In New Delhi Water Supply which found:

Resistant bacteria were found in 4 per cent of the water supplies and 30 per cent of the seepage sites. The researchers identified 11 new species of bacteria carrying the NDM-1 gene, including strains which cause cholera and dysentery.

Since then we’ve seen a steady stream of reports of NDM-1 (and variants, like NDM-2, NDM-4, NDM-5, etc) turn up around the globe.

This week, just in time for our annual Global Antibiotic Awareness week, Professor Walsh is back with another group of researchers, unveiling the discovery of a new resistance gene discovered in China that breaches the last ditch class of antibiotics; polymyxins.

And since this gene can be carried, and transferred to other bacteria via plasmids (see Study: Adaptation Of Plasmids To New Bacterial Species), the expectation is this resistance gene will spread to other bacteria, as we’ve seen with NDM-1.

Emergence of plasmid-mediated colistin resistance mechanism MCR-1 in animals and human beings in China: a microbiological and molecular biological study

Polymyxin resistance was shown to be singularly due to the plasmid-mediated mcr-1 gene. The plasmid carrying mcr-1 was mobilised to an E coli recipient at a frequency of 10−1 to 10−3 cells per recipient cell by conjugation, and maintained in K pneumoniae and Pseudomonas aeruginosa. In an in-vivo model, production of MCR-1 negated the efficacy of colistin. MCR-1 is a member of the phosphoethanolamine transferase enzyme family, with expression in E coli resulting in the addition of phosphoethanolamine to lipid A. We observed mcr-1 carriage in E coli isolates collected from 78 (15%) of 523 samples of raw meat and 166 (21%) of 804 animals during 2011–14, and 16 (1%) of 1322 samples from inpatients with infection.

The emergence of MCR-1 heralds the breach of the last group of antibiotics, polymyxins, by plasmid-mediated resistance. Although currently confined to China, MCR-1 is likely to emulate other global resistance mechanisms such as NDM-1. Our findings emphasise the urgent need for coordinated global action in the fight against pan-drug-resistant Gram-negative bacteria.

Ministry of Science and Technology of China, National Natural Science Foundation of China.

Posted by Michael Coston at 9:23 AM