Oklahoma Rattled By Biggest Quake Since 2011 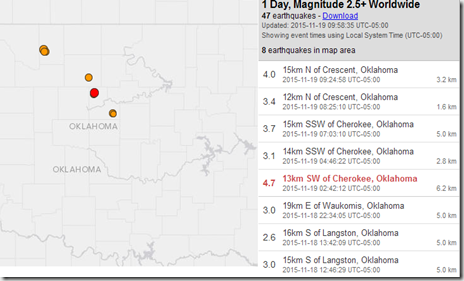 Although not strong enough to cause any serious damage, last night’s 4.7 quake near Crescent, OK was enough of a jolt to send a flock of radar-detectable birds into flight.   And no doubt more than a few residents into flight from their beds. 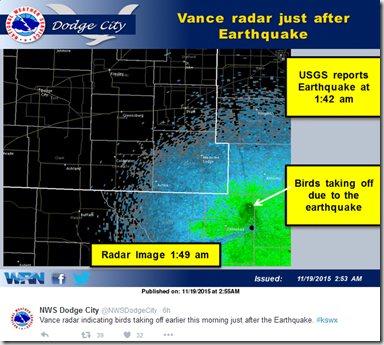 Compared to the more average 3.2 temblor, a 4.7 magnitude quake releases 177 times more energy, as shown by the handy calculator provided by the USGS below. 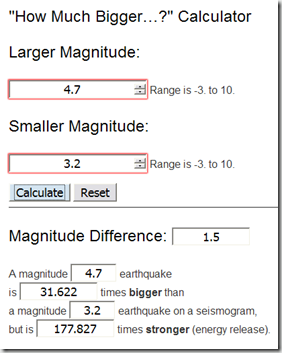 While the upper range of quakes expected in and around Oklahoma is considerably smaller than what one might expect from the New Madrid fault in Missouri or the San Andreas fault in California, a damaging quake is still considered possible.   This statement was issued in May of 2014 by  the USGS

The rate of earthquakes in Oklahoma has increased remarkably since October 2013 – by about 50 percent – significantly increasing the chance for a damaging magnitude 5.5 or greater quake in central Oklahoma.

A new U.S. Geological Survey and Oklahoma Geological Survey analysis found that 145 earthquakes of magnitude 3.0 or greater occurred in Oklahoma from January 2014 (through May 2; see accompanying graphic). The previous annual record, set in 2013, was 109 earthquakes, while the long-term average earthquake rate, from 1978 to 2008, was just two magnitude 3.0 or larger earthquakes per year. Important to people living in central and north-central Oklahoma is that the likelihood of future, damaging earthquakes has increased as a result of the increased number of small and moderate shocks.

You can find some earlier blogs on Oklahoma’s growing earthquake problem at:

The State of Oklahoma maintains an earthquake safety webpage at EARTHQUAKE SAFETY,  while additional Oklahoma specific earthquake monitoring and research information can be found at the Oklahoma Geological Survey.

A reminder that no matter where you live, it pays to be prepared.  And as we discussed on Sunday,  cold weather can make dealing with any disaster situation all that much tougher.

At a bare minimum, every household should have a disaster plan, a good first aid kit (and the knowledge to use it), an emergency battery operated NWS weather radio, and emergency supplies to last a minimum of 72 hours during a disaster.To become better prepared as an individual, family, business owner, or community, I would invite you to visit the following preparedness sites.

For more on increasing your level of preparedness, a partial list of some of my preparedness blogs include:

In An Emergency, Who Has Your Back?

#NatlPrep: Half Of All Americans Need An Earthquake Plan