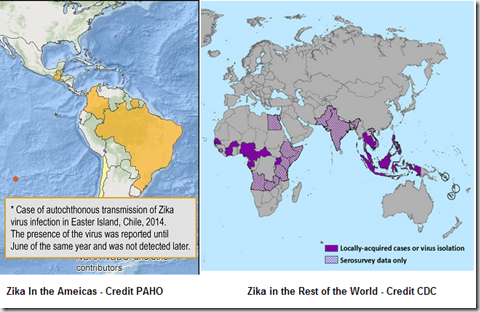 The Latest Maps – but Zika Is Rapidly Adding Territory

Although a causal link has not been firmly established, the evidence linking recent outbreaks of the mosquito-borne Zika Virus and a large increase in congenital brain and skull abnormalities continues to grow.

Five days ago, in Microcephaly In Brazil - Background & WHO Statement,  we saw the initial announcement of just under 400 cases in Brazil – a rate 10 times normal -  and just three days later that number had jumped to more than 700.

In yesterday’s ECDC Risk Assessment: Microcephaly In Brazil Potentially Linked To The Zika Virus Epidemic, we also saw the announcement of a smaller – but still elevated – number of cases in French Polynesia in the aftermath of their outbreak much earlier this year (see Zika, Dengue & Unusual Rates Of Guillain Barre Syndrome In French Polynesia).  The ECDC wrote:

On 24 November 2015, the health authorities of French Polynesia reported an unusual increase of at least 17 cases of central nervous system malformations in foetuses and infants during 2014–2015, coinciding with the Zika outbreaks on the French Polynesian islands. These malformations consisted of 12 foetal cerebral malformations or polymalformative syndromes, including brain lesions, and five infants reported with brainstem dysfunction and absence of swallowing.

None of the pregnant women described clinical signs of ZIKV infection, but the four tested were found positive by IgG serology assays for flavivirus, suggesting a possible asymptomatic ZIKV infection. Further serological investigations are ongoing. Based on the temporal correlation of these cases with the Zika epidemic, the health authorities of French Polynesia hypothesise that ZIKV infection may be associated with these abnormalities if mothers are infected during the first or second trimester of pregnancy.

Asymptomatic, or mild, infection with the Zika virus is considered to be the norm, not the exception (see EID Journal  Dispatch Detection of Zika Virus in Urine), and so many pregnant women may be completely unaware of their fetus’s exposure.  Zika can also be difficult to diagnose, and so it may already be in some regions but not officially recognized.

While all the evidence isn’t in - based on what is currently known - yesterday Ireland’s Health Protection Surveillance Centre issued a strongly worded travel advisory to women who are, or might be, pregnant and traveling in those places of the world where Zika is known or suspected to circulate.

The European Centre for Disease Prevention and Control (ECDC), the HSE and HPSC are advising women who are pregnant or who might become pregnant to ensure that they make every effort to protect themselves against biting mosquitos while travelling in areas affected by Zika virus disease. Zika virus infection is a febrile illness caused by Zika virus (ZIKAV). ZIKAV is spread by infected biting Aedes mosquitoes and can be found in a number of countries in the tropics (see here for a map of affected areas).

Authorities in Brazil and French Polynesia who have been monitoring extensive outbreaks of ZIKAV disease in these countries (each consisting of many thousands of ZIKAV cases) have begun - in the last two months - to see the emergence of large numbers of brain and skull abnormalities in new born babies. Currently there are 17 cases of brain abnormality under investigation in French Polynesia and more than 700 cases of microcephaly in north-eastern Brazil (microcephaly is a congenital condition in which a baby is born with an abnormally small head and it is frequently associated with markedly impaired intellectual development).

Until more information becomes available, HSE and HPSC are advising women who are pregnant or who might become pregnant to be aware of this risk and to make every effort to protect themselves against biting mosquitos while travelling in areas affected by ZIKAV illness (which corresponds very closely with malarious areas in the world).

Pregnant women (or those who are at risk of pregnancy) should discuss this with their Travel Physician and their Obstetrician (if they are already pregnant and booked in). Pregnant women should bear in mind that different mosquitoes (carrying different diseases) can bite at different times of day – they should ask locally which mosquitoes they need to protect themselves against (Aedes mosquitoes that carry ZIKAV tend to bite in the morning and late afternoon; Anopheles mosquitoes that carry malaria tend to bite at night). If pregnant or at risk of pregnancy they should remember to:

Full information on ZIKAV disease is available on the HPSC website. Details of General Practitioners listed with the Irish Society of Travel Medicine are available on their website.

Given the potential for severe outcomes, and the importance of prevention,  I would expect to see other public health agencies follow suit.