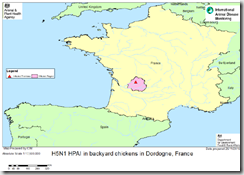 Although one might naturally expect that the report of HPAI H5N1 in France this week would have been due to the same Eurasian H5N1 virus that has plagued Asia, Europe, and the Middle East for more than a decade – preliminary analysis suggests this week’s entry into the HPAI sweepstakes is of a different lineage entirely.

According to a report issued by DEFRA today, it is closely related to LPAI strains detected previously in Europe which are clearly distinguishable from contemporary strains associated with transglobal spread since 2003

In other words, it appears to be a mutated Low Path (LPAI) H5N1 virus of European lineage.   And this gets interesting because this is the third such case in Europe in the past six months (the other two being H7N7 in Lancashire, UK  and Lower Saxony, Germany earlier this summer).

Remarkable since this is believed to be a rare event, with only three other instances of `spontaneous mutation’ from LPAI to HPAI having been reported in Europe over the previous 10 years (the others: UK in 2008, Spain in 2009 & Italy in 2013  all involving H7N7).

HPAI viruses have been generated in the lab by repeated passage of LPAI viruses through chickens (cite FAO) but exactly how and why this occurs naturally is poorly understood (see JVI  Emergence of a Highly Pathogenic Avian Influenza Virus from a Low Pathogenic Progenitor).

LPAI viruses are commonly found in wild and migratory birds, often only producing mild symptoms in poultry. The concern is -  when LPAI H5 and H7 viruses are not quickly controlled -  they have the potential to mutate into highly pathogenic strains.

Hence all H5 & H7 outbreaks are reportable to the OIE, and must be quickly eradicated.

There are a lot of unanswered questions with today’s Defra report, not the least of which is exactly when and where did this LPAI virus become an HPAI virus.   Some excerpts from the report follow:

France has reported an outbreak of highly pathogenic avian influenza, H5N1 in backyard poultry (broilers and layer hens) in the Dordogne (OIE, 2015; see map). An increase in mortality was reported with 22 out of 32 birds dead and the others destroyed as a disease control measure. Samples taken on the 19th November confirmed HPAI. Other disease control measures have been implemented including 3km protection and 10km surveillance zones in line with Directive 2005/94/EC.

This is an initial assessment and as such, there is still considerable uncertainty about the source of virus and where or when a mutation event occurred. However the French authorities have confirmed by sequence analysis that this is a European lineage virus (European Commission, 2015) and as such control measures are focussed on poultry.

The preliminary sequence of the strain indicates it is closely related to LPAI strains detected previously in Europe which are clearly distinguishable from contemporary strains associated with transglobal spread since 2003. H5N1 LPAI was last reported in France in 2009 in Calvados department in northern France in decoy ducks (ie tethered by hunters, and often in contact with wild birds).

H5N1 LPAI viruses of the ‘classical’ European lineage have been isolated from both poultry and wild birds sporadically in Europe, but mutation to high pathogenicity of these strains is a rare event. The last known such event was in 1991 in the UK when mutation occurred in a single commercial flock.

This is only an initial report and at present there are still many unknowns, but the risk to the UK as a result of this outbreak is not significantly increased at this time but we will keep under close review. At the moment, it is not known whether the mutation from LPAI to HPAI occurred in the backyard poultry farm itself or was introduced by some other transmission pathway from another source.

There may not be high significance attached to the knowledge that this LPAI virus has mutated: indeed this is the reason behind our disease control measures for LPAI, so that early detection and elimination reduces the likelihood of mutation events occurring, and can therefore be quickly identified and controlled.

We will continue to monitor the situation closely. We would like to remind all poultry keepers to maintain high standards of biosecurity, remain vigilant and report any suspect clinical signs promptly and in addition using the testing to exclude scheme for avian notifiable disease where appropriate for early safeguard. For more information, please see Gibbens et al. (2014) and www.defra.gov.uk/ahvla-en/disease-control/nad