WHO Update: Microcephaly In Brazil 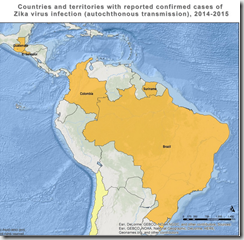 The World Health Organization has posted its second  update in a week on microcephaly in Brazil, bumping the number of reported cases from 399 last Sunday, to 739 today.  These numbers match the ones I posted on Tuesday in ECDC Risk Assessment: Microcephaly In Brazil Potentially Linked To The Zika Virus Epidemic.

Microcephaly is a neurological condition where the child’s head is smaller in circumference than normal, and is often associated with developmental disorders. It can be caused by congenital disorders, maternal illness, or environmental exposures.

While the cause has not been established, this unusual spike in cases comes at the same time as the arrival of the mosquito-borne Zika Virus, and as we discussed yesterday, French Polynesia experienced a similar (albeit much smaller) increase in congenital bird defects after their Zika outbreak (see Post-Zika Outbreak Spike In Congenital Abnormalities In Brazil & French Polynesia).

Despite only having recently arrived in the Americas, Zika is making rapid inroads in both South and Central America, already affecting Brazil, Colombia, and Suriname and with reports of cases this week from both El Salvador and Guatemala.

Until a link between Zika, maternal infection, and these birth defects can be established or disproven, the ECDC advises travelers visiting affected areas, particularly pregnant women, to take individual protective measures to prevent mosquito bites all day round as ZIKV is transmitted by a daytime mosquito and consequently protective measures must be applied during the day (unlike malaria).

The Ministry of Health (MoH) of Brazil has provided PAHO/WHO with an update regarding the unusual increase in the number of cases of microcephaly among newborns in the northeast of Brazil.

As of 21 November, a total of 739 cases of microcephaly were being investigated in nine states in the northeast of Brazil. The distribution of the cases was as follows: Pernambuco (487 cases), Paraíba (96 cases), Sergipe (54 cases), Rio Grande do Norte (47 cases), Piauí (27 cases), Alagoas (10 cases), Ceará (9 cases), Bahia (8 cases) and Goiás (1 case). One fatal case was reported in the state of Rio Grande do Norte.

In response to the situation, the MoH has taken the following actions:

PAHO/WHO and the Global Outbreak Alert and Response Network (GOARN) is deploying technical experts to assist the MoH in various areas, including arbovirus virology, epidemiology and disease surveillance.

Although the cause of this event is yet to be determined, information is being shared with Member States to raise awareness of the situation and to alert countries for similar events in their territories. For these reasons and to further the understanding of the etiology of this event, PAHO/WHO urges Member States to report any increase of microcephaly or other neurological disorders in newborns that cannot be explained by known causes. Recommendations by PAHO/WHO are available in the Epidemiological Alert (see related links).

Posted by Michael Coston at 7:07 AM