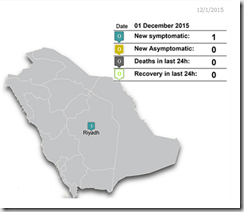 After an unusually quiet middle of November Saudi Arabia reports their second primary MERS case in the past three days, this time in the Capital City of Riyadh.  The designation as a `Primary’ case only tells us these cases had no known exposure to an identified MERS case or a healthcare facility.

Nearly 40% of all known Saudi cases fall into this `primary’ category, and for most, the exact source of infection remains a mystery. 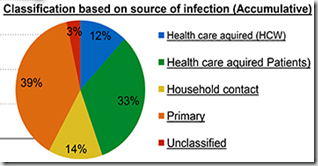 Since the MOH doesn’t provide us with dates of onset - and has been known to delay reporting of cases for several days - it makes it difficult to draw any conclusions based on the advanced stage of illness of these two patients.

Late detection, however, could indicate a delay in diagnosis and a greater risk of exposure to others. Hopefully we’ll learn more when the WHO posts an update.

Posted by Michael Coston at 6:28 AM