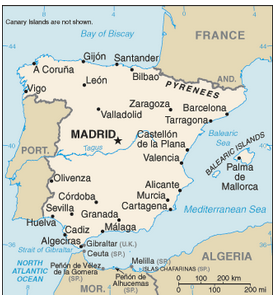 
Twelve days ago, in Catalonia: Enterovirus Outbreak Hospitalizes 29 Children we looked at early reports of an outbreak of severe enterovirus in Catalonia - in the Northeast of Spain.

While not explicitly stated, my assumption at the time was that the culprit was likely EV-71, which the ECDC confirms in today's report.


Human Enterovirus 71 (EV-71) – which is most commonly reported in Asia and the Western Pacific region - is one of more than 60 non-polio enteroviruses (NPEVs) known to cause cause human illness, and that primarily affect children under the age of 10 - usually in the form of HFMD.

EV-71 is also somewhat notorious for occasionally causing serious - even fatal - neuroinvasive disease in some small percentage of cases.


First, the ECDC assessment, followed by a fresh media report that increases the number of hospitalized children to 82, and some additional background.

Enterovirus A71 (EV-A71) is a major cause of hand, foot and mouth disease (HFMD) and is particularly prevalent in parts of Southeast Asia, affecting thousands of children and infants each year. EV- A71 infection is transmitted from person to person by direct contact with nose and throat discharges, saliva, fluid from blisters, or the stool of infected persons.

The illness is contagious during the acute stage and perhaps longer, as faecal shedding of the virus can continue for several weeks. Incubation period ranges from 3 to 7 days.

It is the most neuropathogenic nonpolio enterovirus in humans, causing a variety of neurological diseases including aseptic meningitis, encephalitis and poliomyelitis-like paralysis.

The last epidemics of EV-A71 infection in Europe occurred during 1975 in Bulgaria with over 705 cases, of which 149 cases developed paralysis, and 44 deaths. Hungary  experienced an outbreak of EV-A71 in 1978 with 323 cases (13 poliomyelitis-like paralysis, 145 encephalitis, 161 aseptic meningitis, 4 hand, foot and mouth disease).


The most recent media report (dated today) raises the number of children affected to 82.

Six children affected by enterovirus with neurological disorders are admitted to the intensive care unit ( ICU ), two more than last Monday, and the total affected has risen Friday to 82 children, most of whom have the type A71 associated with the rhombencephalitis.

Speaking to the media after meeting in follow - up committee, deputy director of the Catalan Health Service (CatSalut), Josep Maria Argimon; Secretary of Public Health, Joan Guix; the Chief of Pediatrics Hospital Vall d'Hebron in Barcelona, ​​Carlos Rodrigo, and the head of Microbiology Department of Vall d'Hebron, Tomàs Pumarola have updated the number of cases and specified distribution.

According Argimon in health region of Camp de Tarragona have detected 32 cases a "superior number expected" ; in Barcelona and its metropolitan region they have registered 35 cases ; in Girona , five affected; Central Catalonia four cases; in Lleida other four , and Terres de l'Ebre two cases

While it has been nearly 40 years since Europe has seen very  large outbreaks of EV-71, we continue to see large epidemics in China, Taiwan, Cambodia and Vietnam nearly every summer, often involving thousands of children and dozens of deaths.

For now, control and prevention are limited to promoting good hygiene, and removing children with signs of the disease from child care or school environments.

We've been fortunate that HFMD outbreaks in Europe and North America have been largely confined to the milder A16, A10 and (the somewhat more serious) A6 coxsackieviruses (see EID Journal: HFMD Cluster Due To CVA6), and not the more dangerous EV-71.

But as we saw two summers ago in EID Journal: New Introductions Of EV-71 Subtype C4 To France – 2012, and now with this outbreak in Catalonia, there is little reason to believe that EV-71 will forever remain only a problem in Asia and the Western Pacific.