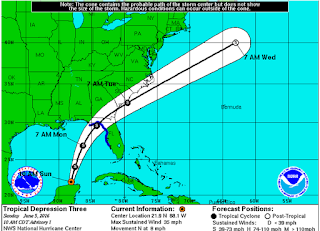 
The disturbance in the Caribbean I mentioned yesterday has developed enough closed circulation to be named a tropical depression this morning, and a tropical storm warning has been issued for Florida's Gulf coast.

While most of the models predict this storm will top out at as moderately strong tropical storm, even storms of this size can prove destructive.  Tornadoes can spin up, torrential rains can cause flooding, and coastal tides can run several feet above normal.

The advisory, issued today at 11am, reads:

...TROPICAL DEPRESSION FORMS OVER THE SOUTHERN GULF OF MEXICO...

A Tropical Storm Warning has been issued for the Gulf coast of Florida from Indian Pass to Englewood.

SUMMARY OF WATCHES AND WARNINGS IN EFFECT:

A Tropical Storm Warning is in effect for...
* Indian Pass to Englewood

A Tropical Storm Warning means that tropical storm conditions are expected somewhere within the warning area within 36 hours.

Interests along the coast of northeastern Florida through southern South Carolina should monitor the progress of this system.

Maximum sustained winds are near 35 mph (55 km/h) with higher gusts. Some strengthening is forecast, and the depression is expected to become a tropical storm before reaching the coast of Florida.


Although this system is unlikely to pose a major threat, my region could see some power outages, and minor damage.


Last month in Hurricane Preparedness 2016, we looked at the things you and your family can do to prepare for tropical weather.  If you haven't already done so, now would be a very good time to review your plans and preparations.


As always, when it comes to getting the latest information on hurricanes, your first stop should be the National Hurricane Center in Miami, Florida. These are the real experts, and the only ones you should rely on to track and forecast the storm.


And if you are on Twitter, you should also follow @FEMA, @CraigatFEMA, @NHC_Atlantic, @NHC_Pacific and @ReadyGov.
Posted by Michael Coston at 11:18 AM