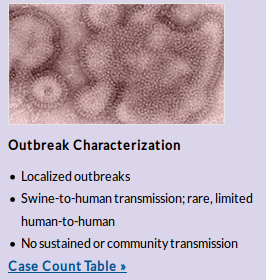 On Monday, after reports of 4 recent human H3N2v infections (2 in Michigan, 2 in Ohio) linked to attendance of county fairs, the CDC issued new Interim Guidance for Clinicians on Human Infections with Variant Influenza Viruses on testing, reporting, and treatment options.

Also on Monday, we learned of Additional H3N2 (in Swine) Reported At Michigan Fairs, and looked at the CDC's recommendations to the public, and swine exhibitors, on how to reduce the risk of contracting the virus.


Of the three swine variant strains reported in the United States, H3N2v has been the most common, making up 94% of all reported cases. Most years, we see fewer than a dozen cases reported, but in 2012 an outbreak linked to swine exhibitions resulted in more than 300 cases across 10 states.


Today we've another report of sick pigs at a country fair, this time from Ashtabula County, Ohio  - along with anecdotal reports of `flu-like-illness' among some of the attendees.


This report (follow the link to watch the video) from WFMJ-TV, in Youngstown, Ohio.

Nearly two dozen pigs tested positive for swine flu at the Ashtabula County Fair over the weekend, prompting concern for the pigs at the Canfield Fair, which kicks off in two weeks.

According to the Ashtabula County Agriculture Society, 20 pigs at the fair showed influenza-like symptoms, including runny noses, loss of appetite, lethargic movement and fever. Many of the pigs were sent home. After testing positive for swine flu, the pigs were treated with aspirin to help bring their fevers down.

The Ashtabula County Agriculture Society says some children who attended the fair also showed similar signs, but no one has been diagnosed with the virus.

Presumably local health authorities are following up on these potential `cases' as per Monday's CDC guidance.


While local and state agriculture officials are downplaying the risks to the fair-going public (which, at this time, are admittedly small), the bigger picture is that these swine flu viruses are continually evolving, and their continual spillover into the human population is not without risks.


The CDC describes their importance in their Key Facts about Human Infections with Variant Viruses.

Why are human infections with variant viruses of concern?

With county and state fair season running well into October, we'll probably see more reports like this in the weeks ahead.
Posted by Michael Coston at 7:54 AM