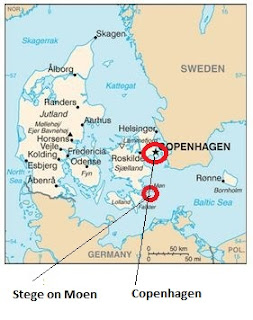 
Earlier today, in Denmark: DVFA Investigating Dead Ducks On Moen, we learned that tests on several dead birds were in progress to see if they died from the H5N8 virus, which has been reported in 6 European countries over the past week.

This afternoon we now have confirmation, and a second location, in the Capital city Copenhagen.


This statement from Denmark's DVFA.

The disease is not dangerous to humans but is highly contagious among birds. Therefore entrepreneur DVFA now a number of precautions to guard against the spread of infection.


The serious bird flu H5N8, is spreading in Europe, is now also found in dead birds in Denmark. National Veterinary Institute has found the virus in a group of wild tufted ducks found on Moen and one tufted duck found in Christiania in Copenhagen. It can not be excluded that the disease is in wild birds in other parts of the country. But it is not found in herds.

The disease is contagious usually not for us humans, and according to the UN is no people have been infected with this current type of bird flu. And there is also no risk of becoming infected with the disease through either eggs or duck roast Martinmas Eve.

If you find a dead bird in the wild must nevertheless be allowed to remain to guard against spreading any infection. Find more at the same location should contact the Food Authority on telephone 72 27 69 00th

disease is highly contagious among birds and can cause high mortality if it spreads to poultry farms.

Therefore, all shows and other gatherings of birds and poultry banned with immediate notice. In addition, the herd owners and backyard poultry owners as far as possible keep their birds indoors and otherwise follow  the recommendations for infection protection . The same applies zoos. These measures apply to the whole country until otherwise are announced.

- It could have major implications for the animals and exports, if the disease is moving into the stables. Therefore it is so important to both hobby breeders and professionals ensure that their poultry do not come into contact with wild birds or their bird droppings.

Therefore poultry as far as possible be moved inside, like you have to change shoes when you walk in the house, so you do not drag the disease within the herd, says deputy head Stig Mellergaard, DVFA.

Food Administration cooperates with the Emergency Management Agency, National Veterinary Institute and the Agriculture and Food to handle the situation.