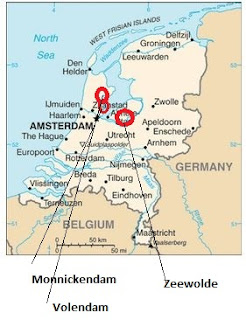 Yesterday in Netherlands: Investigating Suspected HPAI H5N8 In Bird Deaths we learned that officials were testing dead birds in Monnickendam. Although I haven't found an official government statement, the media is reporting that birds have tested positive (Monnickdenam, Volendam, and Zeewolde) for avian flu.

A tweet from @Rijkswaterstaat, the Ministry of Infrastructure, indicates a helicopter survey of the coastline is underway, looking for more dead birds.

This brings to 8 the number of EU countries reporting HPAI H5N8 over the past 10 days.  We have this (translated) media report from nos.nl.

Dead water birds that are found in Monnickendam, are as already suspected infected with bird flu virus type Influenza A virus subtype H5N8. The virus is contagious and lethal to birds. As a precaution yesterday was already decided on a  national indoor confinement and physical movement.

According Rijkswaterstaat were found yesterday in Monnickendam and Volendam sixty dead birds. Also at Zeewolde in Flevoland found a victim of bird flu. For that reason, today with two helicopters searched the coast from Zeewolde to Volendam. In addition, only a few dead birds were found. Tomorrow look at what needs to be done.

It is suspected that the bird flu came from Germany, Austria, Hungary, Poland or Switzerland to the Netherlands. In these countries, the type of Influenza A virus subtype H5N8 has previously been found in dead birds.

End of 2014, the Influenza A virus subtype H5N8 virus appeared for the last time in the Netherlands. The people also dangerous H7N7 variant spread in 2003, when 89 people became ill in the Netherlands; one of them died.