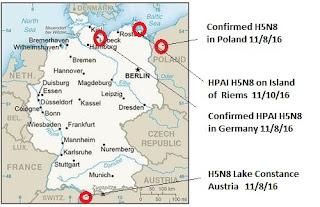 
More and more reports are coming in of dead birds testing positive for the H5N8 virus across Europe (see here, here, and here).  This morning we have another report from northern Germany, this time on the island of Riems in Mecklenburg - Western Pomerania.

This from the BILD.de news ticker.

Agriculture Minister Till Backhaus (SPD) announced in Schwerin, the most contagious viral H5N8 was detected in a dead wild birds on the Baltic island of Riems. Meanwhile, the bird flu is spreading in Hungary. In a poultry farm diseased an undisclosed number of ducks on the excitation of the subtype H5N8, as the agricultural portal agroinform.com reported. From Baden-Württemberg, Austria, Switzerland and Poland cases were known by bird flu last. In Schleswig-Holstein there confinement of poultry. This measure is now provided in Mecklenburg-Vorprommern.


Another report, from SVZ.de, indicates dead birds on other islands in the region are being tested for the virus.


Bird flu has reached Mecklenburg-Vorpommern. In a dead tufted duck, on the island Riems was found near Greifswald, the virus H5N8 had been detected, said Agriculture Minister Till Backhaus (SPD) on Thursday in Schwerin.

In addition, at several other dead birds is suspected that they were also infected with the highly pathogenic form of avian influenza. The animals were found on the Baltic Sea island Greifswalder Oie and Ruden. The test results should be available even on Thursday.

Backhaus imposed thereupon for poultry farms across the country kept indoors. Detection of Avian Influenza have the consequence that all poultry owners must bring to Sunday the animals under roof.


So far Hungary, Poland, Germany, Austria and Croatia have confirmed H5N8 during the past week, and we await word on testing being conducted in The Netherlands and Denmark.