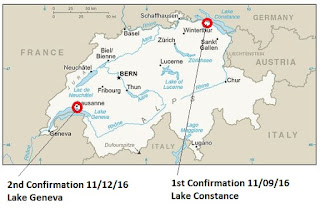 
Three days ago HPAI H5N8 was confirmed in dead Tufted ducks retrieved from the shores of Lake Constance in the Northeast of Switzerland.


Today, we've confirmation the virus has been detected in dead birds along the shore of Lake Geneva, roughly 150 miles to the southwest, very near the border of France.

This from the Swiss Federal Office of Food Safety and Veterinary.


Bern, 11.12.2016 - After the bird flu virus has occurred in the Lake Constance region, has been the virus now confirmed in wild birds that have been discovered dead on the shore of Lake Geneva Vaud. The Federal Office of Food Safety and Veterinary Office (BLV) is now extending the control areas and adjusts the measures to continuously to prevent the infection of domestic poultry in all circumstances. For a transmissibility of the virus to humans, there is no evidence.


In a tufted duck and laughing gull, which have been found dead in the port of Lausanne (Vaud), the avian influenza virus subtype H5N8 was detected by. Several days ago similar cases have already occurred on the banks of Lake Constance.


Given the increased risk of infection in areas where stopping wild waterfowl that recently decreed protective measures need to be intensified around the larger lakes. To avoid any contact of wild birds with domestic poultry, must be in a control area of ​​one kilometer wide poultry be kept indoors or in housing systems with a tight roof and lateral boundaries.

The BLV is beginning next week to adjust the relevant regulation. Should it require further development, the BLV would reinforce the measures further. The goal is to prevent the infection of domestic poultry in all circumstances.


So far no cases in poultry farms


A great vigilance is warranted. The poultry farmers are encouraged to implement the recommendations of BLV. Those encounter dead wild birds are requested not to touch them and to contact a Park Ranger, to the surveillance authority or to the cantonal police.