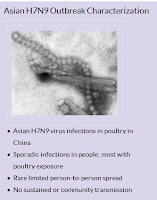 
While no one knows which of the myriad novel flu viruses (avian, swine, canine, etc.) in circulation around the world will make a run at starting the next pandemic - or when - there are some odds on favorites out there.

Two years ago - amid Egypt's record setting H5N1 epidemic and the rapid emergence and spread of HPAI H5N8/H5N2 around the globe - H5Nx led the pack (see WHO: H5 Currently The Most Obvious Avian Flu Threat).

But today it is the Asian avian H7N9 virus that has captured the pole position.


With the caveat that long-shots sometimes come in (think: 2009's swine H1N1 pandemic), public health entities around the world have been watching this year's H7N9 epidemic in China with a wary eye, and have been issuing advisories and risk assessments as they make contingency plans against this threat.

Last week, the World Health Organization announced new Candidate Vaccines For Pandemic Preparedness and held a Virtual Press Conference On H7N9. In January Hong Kong's CHP released an Epidemiological Assessment Of H7N9 while more recently the  ECDC released a Comment On The HPAI Mutation Of H7N9,

Our own CDC has published two detailed MMWR Reports on H7N9 this winter:

MMWR: Assessing The 4th Epidemic Wave Of H7N9 In China


Yesterday the CDC published an updated risk assessment on H7N9.  While we've no evidence H7N9 is spreading efficiently from human-to-human, the CDC - like all global health agencies - is watching the situation carefully.

Follow the link to read the full report, with accompanying links.

Most human infections with avian influenza viruses, including Asian H7N9 virus, have occurred after exposure to poultry; Asian H7N9 viruses continue to circulate in poultry in China. Most reported patients with H7N9 virus infection have had severe respiratory illness (e.g., pneumonia). Rare instances of limited person-to-person spread of this virus have been identified in China, but there is no evidence of sustained person-to-person spread. Some human infections with Asian H7N9 have been reported outside of mainland China but most of these infections have occurred among people who had traveled to mainland China before becoming ill. Asian H7N9 viruses have not been detected in people or birds in the United States.

While the current risk to the public’s health posed by Asian H7N9 virus is low, the pandemic potential of this virus is concerning. Influenza viruses constantly change and it’s possible that this virus could gain the ability to spread easily and sustainably among people, triggering a global outbreak of disease (pandemic). In fact, of the novel influenza A viruses that are of special concern to public health, Asian lineage H7N9 virus is rated by the Influenza Risk Assessment Tool (IRAT) as having the greatest potential to cause a pandemic, as well as potentially posing the greatest risk to severely impact public health.

It’s likely that sporadic human infections with Asian H7N9 virus associated with poultry exposure will continue to occur in China. It's also possible that Asian H7N9 virus may spread to poultry in neighboring countries and that human infections associated with poultry exposure may be detected in neighboring countries. It’s also possible that Asian H7N9 infections may continue to be detected among travelers returning from countries where this virus is present. However, as long as there is no evidence of ongoing, sustained person-to-person spread, the public health risk assessment would not change substantially.

The U.S. Government supports international surveillance for seasonal and novel influenza A viruses with pandemic potential, including Asian H7N9. CDC is following this situation closely and coordinating with domestic and international partners. CDC takes routine preparedness actions to counter pandemic threats as they are identified, including developing candidate vaccine viruses (CVVs) to use for vaccine production in case vaccine is needed. CDC has prepared a risk assessment of Asian H7N9. Other routine preparedness activities include ongoing review of new viruses and virus sequences to assess their genetic and antigenic properties as well as their antiviral susceptibility. This information informs an ongoing risk assessment process, which guides further actions. CDC also has issued guidance to clinicians and public health authorities in the United States, as well as provided information for people traveling to China. CDC will provide updated information as it becomes available.